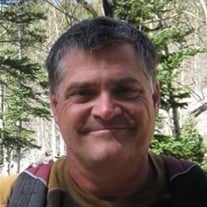 William Paul Williams, Jr. (Bill) passed at the age of 59 from this earthly realm into the loving arms of Christ on March 27, 2021, after nearly 12 years of battling thyroid cancer metastatic to his lungs, as well as COPD, A-Fib and Graves’ Disease. Bill was born on November 3, 1961 in Riverside, CA, to Paul and Dorothy Williams (who later divorced). Bill and his siblings Mike, Tom and Suzanne were raised in Corona, CA, where Bill attended Garretson Elementary, Corona Junior High School and Corona High School, then Chaffey College, Rancho Cucamonga, CA and lastly San Diego State University, San Diego, CA. Bill’s favorite sport was playing baseball and he played for as long as his cancer would let him. Bill loved to spend time with friends and family, and most notably on Labor Day weekend in 1988, while visiting a friend in Sacramento, Bill was introduced to a young woman, Cindie Chick. Bill and Cindie continued to date and their relationship bloomed into love and they were married in July of 1990. Bill and Cindie were blessed with two handsome sons, Gregory (28) and Alexander (25) and raised their sons in Corona, CA. While they were living in Corona, CA, Bill thoroughly enjoyed to volunteer his time with their church, Cub Scouts (Pack 134 as Cub Master for 7 years), Scouts (Troop 54), Quality West Wing (museum devoted to the U.S. presidency), coaching or managing his sons’ little league baseball teams, and last but not least being a part of the Dad’s Club at his sons’ school, Lincoln Fundamental Elementary School. Bill and Cindie uprooted the family and moved to Fort Collins, CO in 2007. Bill continued with his volunteer work in Fort Collins, CO with their church, men’s church baseball team, and Scouts (Troop 191). Bill has always been a hard worker and has worked in different industries and varying jobs over the years, but in the last 30 years he worked mainly in the precast concrete industry as a draftsman, estimator, or project manager. In between precast concrete jobs, Bill even tried his hand at selling real estate for a number of years in Corona, CA. Bill’s coworkers at his last place of employment in Loveland, CO were good caring friends and they enabled him to work right up to until its closure in April 2020, they were a true blessing. Bill had a great love for politics and reading historical books and biographies. He a great knowledge of varying topics and had a wonderful gift for talking with people of all walks of life. Bill loved nature and the outdoors and he and his family enjoyed camping for many years, and later on it was hotels, not the same but allowed him to get out and go places until he no longer could. Bill always had a smile for everyone and when asked how he was he would tell you he was good even if it was a bad day because he would rather show Christ’s love in lifting someone else up then bring them down with his own pain or troubles. Bill was a loving and caring husband and father, and he also cherished the many friends he made through his life time and he will be missed dearly by so many. Bill is predeceased by his father William Paul Williams, Sr. (Paul), his step-mother Barbara (Tillman) Williams and his father-in-law Ralph Chick. Bill is survived by his wife, Cindie and sons Gregory and Alexander all of Fort Collins, CO; mother Dorothy (Repine) Williams of Corona, CA; brother Michael Williams (Jeanette) of Corona, CA; brother Thomas Williams (Leah) of Cagayan de Oro, Philippines; sister Suzanne Williams of Corona, CA; and numerous nieces, nephews, great nieces, great nephews and cousins; Uncle Delbert Williams of Westfield, WV; Uncle Robert “Bobby” Williams (Millie) of North Myrtle Beach, SC; mother-in-law Evelynne Chick and brother-in-law Trevor Chick both of Tabor, Alberta, Canada. In lieu of flowers the family asks that you donate to Thyca: Thyroid Cancer Survivors’ Association, Inc. (www.thyca.org/donations/) or American Thyroid Association (www.thyroid.org/donate/donate-online/). Currently an outdoor service is being planned for Labor Day weekend 2021 in an outdoor setting yet to be determined, where the smell of pine needles and earth will mingle with memories, laughter and tears as Bill is lovingly remembered.

William Paul Williams, Jr. (Bill) passed at the age of 59 from this earthly realm into the loving arms of Christ on March 27, 2021, after nearly 12 years of battling thyroid cancer metastatic to his lungs, as well as COPD, A-Fib and Graves&#8217;... View Obituary & Service Information

The family of William Paul Williams, Jr. created this Life Tributes page to make it easy to share your memories.

Send flowers to the Williams family.