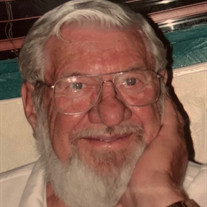 We are celebrating the life of our father William (Bill/Papa) Lee Stromberg Sr. 97 of Loveland, Colorado. Dad died December 1, 2021, at the Mirasol Green Home. Bill was born September 24th, 1924, in Stromsburg Nebraska. He had two brothers Charles and Allen. He enjoyed his youth playing football and basketball before graduating from Stromsburg High School in 1943. He joined the Navy in 1944, and was shipped to Oceanside, California for boot camp. He became a radio operator and still remembered Morse code. After leaving the service he married Nan Kathryn Brazee on February 9,1949. They started a dairy farm near Polk, Nebraska and brought five children into the world: Linda Kraxberger (David), Vicki Kingry (Howard), LaNell (JoJo) Payson (Jim), Connie Sherwood (Tom), and Will (Debbie). Bill loved farming, but in the summer of 1962 he decided to make the move with the family to Fort Collins, Colorado. He tried a few jobs, but ultimately found his work-home at Woodward Governor as a tool grinder. He was there for 25 years. In 1977 mom and dad built a home in Poudre Park. That’s where they spent most of their days, and where dad was really happy. He brought his green thumb with him from Nebraska and had an incredible garden and hydroponics. His tomatoes were beautiful and so delicious you could eat them like apples. He also created amazing hope chests and steamer trunks for his 12 grandchildren, built little bear rocking chairs for the grands, and gifted those around him with such treasured creations over the years. Nana and Papa loved the mountains and having friends for their breakfasts by the Poudre River. Unfortunately, Nan had a stroke in 2006, and they were forced to move off the mountain. They moved to Good Samaritan in Loveland and enjoyed their time there until mom’s death in 2013. Our dad moved to the Mirasol in 2018 after having a back surgery. Again, he used his gardening talent to care for all their plants and fill their flower beds every year. He was very social and would visit with anyone. He would also give you a copy of Sarah Young’s Jesus Calling, which he read over the phone every morning at 8:30 with one of his children, or one of his 23 great-grandchildren. Dad handled himself so well during his extended 14-month-quarantine, and he was cheerful and encouraging to all, to the very end. As Tim Tebow would say, “I love to win in the fourth quarter. No matter your situation, finish strong!!!” Our dad finished strong. Papa loved Jesus, his family, and his friends. He will be dearly missed. In lieu of flowers donations may be made to St. Jude's Children's Research Hospital in care of Bohlender Funeral Chapel, 121 W. Olive St., Fort Collins CO 80524.

The family of William Lee Stromberg, Sr. created this Life Tributes page to make it easy to share your memories.

We are celebrating the life of our father William (Bill/Papa)...

Send flowers to the Stromberg family.