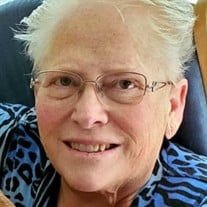 Wendy Annette Standring, age 69, of Ft. Collins passed away after her 18 month battle with Liver Cancer on Jan 30, 2021 at McKee Medical Pathways Hospice in Loveland, Colorado. Wendy was born Christmas Day in 1951 in Missoula, Montana to John Wendell Lythgoe and Wylma Ruth (Skaw) Lythgoe. She had two siblings, Scott and Kim. When Wendy was young, she acquired the nickname “Bambi” and that stuck with her into her early adult years. Wendy had many lifelong friends that she cherished and talked to very often, if not every day, Yvonne Mannon, Sharon Sanders, Earlene Bell just to name a few. Wendy had 3 children, Kaydi, Andrew and Patricia. She also had many “adopted” children that kept in touch throughout her years. She was a mother to all, and everyone who came over knew that love filled her home. Many times over her life there was an "adopted person" living in the house. She always opened her door to someone in need of shelter, love, food, and a family. Wendy married Charlie Standring at Lory State Park on June 27th, 1994, which acquired her 2 more adult step-children, Derek and Jason. Together Charlie and Wendy built a life together and home that would last for their 26+ years of marriage. Together they shared their love of horses, faith and family. Wendy retired after about 30 years at CSU and had many friends that resulted from her working years. Dr Skook Karaki was her 1st supervisor there back in the 70’s, and was in her life from the day she met him until recently when he moved with his children out of state. She loved animals – horses, dogs, sheep, cows, goats - especially the babies. In her younger years, she was very involved in the 4-H community and loved to have the chaos of the “fair season” every summer with her kids projects. Over her 69 years, she had over 100 horses (we have a list!!) – but her favorite horse was Magnoila Star (Maggie). She had Maggie for over 30 years and Wendy was her first and last ride. Maggie is definitely waiting for Wendy on the rainbow bridge with all the other many animals that she raised. I’m sure that bridge is full! Survivors include her husband, Charlie Standring of Ft. Collins, brother Scott (Kristi) Lythgoe, two daughters Kaydi and Patricia (Eric), two step-sons Derek and Jason Standring, grandchildren Brody (Marki), Bryce (Hannah), Jada, Tayden, many nieces and nephews. Preceding Wendy in death are her parents John and Wylma, son Andrew, great-grandson Greyson Jay Carter, sister Kim, and many beloved friends and other relatives. A private graveside will be held at Grandview Cemetery. You will be able to view the graveside on Wendy's obituary page at bohlenderfuneralchapel.com

The family of Wendy Standring created this Life Tributes page to make it easy to share your memories.

Wendy Annette Standring, age 69, of Ft. Collins passed away after...

Send flowers to the Standring family.