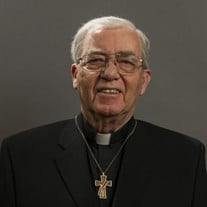 Warren Gale Lybarger April 5, 2022 Warren Gale Lybarger, 88, loving husband, father, Deacon, and friend passed into eternal glory on the morning of April 5, 2022, at home surrounded by family. Warren was born in Sterling, Colorado on December 12, 1933, to Willis and Helen Lybarger. He was raised in Sterling. Upon graduation from Sterling High School, he moved to Fort Collins to attend Colorado A&M. Warren married Edna Ernestine Cordova on August 15, 1952 and celebrated sixty-one years of mutual love. While attending school, Warren worked at JM McDonalds where he met Edna. After their marriage he worked various jobs until becoming a public accountant and provided accounting and tax services. In June 1984, Warren was ordained a Permanent Deacon for the Archdiocese of Denver. He served in this capacity for 28 years at St. Joseph Catholic Church in Fort Collins and St. John the Evangelist Catholic Church in Loveland. Shortly after ordination, he was hired as the Business Administrator for St. Joseph Parish. As a deacon Warren performed numerous marriages, baptisms and funerals and immensely enjoyed helping folks with their faith journey. Warren is survived by his devoted children Warren (Mary Lou), Stephen (Deborah), Timothy (Debbie) and Suzanne (Doug): his brother Larry (Joyce); sister Elaine (David) along with nineteen grandchildren and twenty-nine great grandchildren, and one great, great grandchild along with other family and friends. Warren was preceded in death by his wife, Edna, his parents, and brothers Jerry, Robert, and Carter. In lieu of flowers, the family asks that memorial donations be made to Catholic Relief Services, Food for the Poor, St. Jude Children’s Hospital, or other charity that serves those in need. Public viewing will be Tuesday, April 19, 2022, from 9:00 a.m. to 4:00 p.m. at Bohlender Funeral Chapel. The Vigil will be held at Saint Joseph Catholic Church at 6:00 p.m. on April 19, 2022. The Mass of Resurrection will be celebrated at 11:30 a.m. on Wednesday, April 20, 2022, at Saint Joseph Catholic Church. Archbishop Samuel J. Aquila will officiate. Interment at Grandview Cemetery will follow the Mass, and a reception will conclude the rites at the Knights of Columbus Hall. Visit bohlenderfuneralchapel.com to send condolences.

The family of Warren Gale Lybarger created this Life Tributes page to make it easy to share your memories.

Send flowers to the Lybarger family.