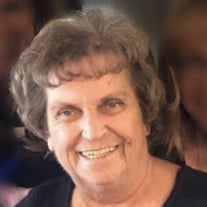 Fort Collins resident Peggy Sexton came to the end of life’s journey Sunday, August 18, 2019, and in the twinkling of an eye found herself once again made whole in the presence of her Lord and Savior. Surrounded by family, Peggy peacefully drew her last breath, left her pain-ridden, earthly body and entered into eternal rest. Peggy was 75 years old at the time of her passing. Peggy was born to Orville and Edith Byler in Loveland, Colorado on October 16th, 1943, at midnight, just twelve short hours following the tragic death of her father, Orville, at noon. When she was 2 ½ years old, her mother moved with her two young daughters to Saratoga, WY and married Bill Schultz. Bill and Edith would go on to raise her, and her older sister, Marylee, as their own. It wasn’t long before the family of four became a family of five with the addition of a son, Chris, and thus began the life long bond of being not only siblings, but that of being the very best of friends for Peggy and Chris. The family moved to Fort Collins when Peggy was in her teens where she attended Fort Collins High School. Although she left school in the middle of her junior year, in 1980 she finished her studies and received her high school diploma, an accomplishment that she was very proud of. On January 23, 1961, Peggy married the love of her life, Ben Sexton. His death left them seven weeks shy of their 56th wedding anniversary. Their union produced three daughters and one son. Her husband and children, and then the grandchildren and great grandchildren were the light of her life. She loved them dearly and there was never a day they didn’t know of her unconditional love. Peggy was a stay at home mom for 28 years until she joined forces with Ben at Cactus Hill Trucking and became an over the road dispatcher. All those years in the earlier years of their marriage learning about mileage and the time it took to drive from stop to stop, served her well in the transportation industry. She was a born again, baptized Christian and it was no secret that her heavenly father was no stranger to her prayers for her family. Peggy loved games of all sorts. Friends and family were always welcome at the table for a game of scrabble, pinochle, pitch, or putting together jigsaw puzzles along with a hot pot of coffee for the beverage of choice. She was a lifelong learner and loved word searches, crosswords, and Yahtzee. She loved her Rockies and Broncos. She was an avid reader and very likely, Andy Garcia’s biggest fan. She said he had the second cutest smile on the planet…Daddy still held first place! Ben’s love of music and the “family music party” became an extra special bond for Ben and Peg as the years went by. As the kids were growing up, everyone knew that the Sexton’s house was the place to be for fun, family and lots of music. Whether singing with the family, providing music for Sunday morning church services or just enjoying harmonizing with Ben on an evening at home, the love of music was a gift they shared. Peggy is survived by her daughters, Bonny Sirios, Sandy Nelson (Walter) and Paula Schlagel, all from the Windsor/Fort Collins area and son, David Sexton (Kay) from Okanogan, Washington; brother, Chris Schultz (Marshall), brother-in-law, John Burnham, 18 grandchildren, 25 great grandchildren, and numerous nieces, nephews and cousins. Peggy was preceded in death by her husband, Ben Sexton, and her sister Marylee Burnham. There will be a visitation Friday evening, August 23rd, at Bohlender Funeral Home, 121 W. Olive Street, Fort Collins, CO from 6:00 pm-8:00 pm. The Celebration of Life service will be Saturday morning, August 24th, at Timberline Church, 2908 Timberline Road, at 10:30 am. Graveside services will follow immediately after at Roselawn Cemetery, 2718 E. Mulberry, Fort Collins, CO. Reception following graveside services at the home of Sandy and Walter Nelson (daughter) 8449 County Road 80.5, Fort Collins, CO. The family would like to thank everyone at the Columbine West Health and Rehab Center, and Halcyon Hospice and Palliative Care for the exceptional care and love shown to Mama especially the last six weeks of her life. Please know that we will always be grateful knowing she was genuinely loved and cared for, and you will never be forgotten. Memorial contributions can be made out to Timberline Church, memo Peggy Sexton memorial.

Fort Collins resident Peggy Sexton came to the end of life&#8217;s journey Sunday, August 18, 2019, and in the twinkling of an eye found herself once again made whole in the presence of her Lord and Savior. Surrounded by family, Peggy peacefully... View Obituary & Service Information

The family of Peggy Sexton created this Life Tributes page to make it easy to share your memories.

Send flowers to the Sexton family.