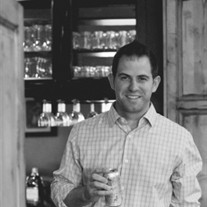 Todd Justin Steyer died surrounded by his family at home on December 20, 2020 at age 35. To the surprise of many, it was brain cancer that took Todd from us at such a young age and not Todd’s undying love for questionably sourced food, rock lobsters, and alcohol induced acts of athleticism. Todd lived hundreds of years in the 35 calendar years we had with him, by attacking life with a smile, swinging it around on the dance floor, dropping it to the ground, and picking it back up to continue the dance. Todd was a rare combination of someone who had a love of life and a firm understanding of what was important — enjoying life with family and friends. Todd’s many and eclectic hobbies included being insanely talented at any artistic endeavor he attempted, fly fishing with friends, telling you the most efficient way to do something, attending country concerts with his loving wife, brewing beer, understanding that any gathering of more than three people required a keg, buying new tools, using said tools once, eating, threatening to get a motor cycle to scare his mother and sister, buying a motor cycle and not telling his mother and sister, and selling said motor cycle when his wife told him to. Todd’s regrets were few, but included drinking the water in the Dominican Republic, being friends with Justin Boone, never seeing the Brown’s win a Super Bowl, and not getting to tell off John Elway. Of all the people he touched, his most proud achievements in life were his precocious (almost) two year old daughter Emerson (“Emmy”), and marrying his wife Jennifer Lorinne Moody who championed him in all his glory and lovingly supported him physically and emotionally during their last days, weeks, and months together. Todd was born to George and Jody in Medina, Ohio in the summer of 1985 and soon earned the title of “our favorite child” by playing the role of peacekeeper to his willful older brother Grant and younger sister Jenna. In addition to his wife, daughter, parents, and siblings, Todd (aka “the Toddfather”) is survived by Brenda (mother-in-law), Walt (father-in-law), Karla (sister-in-law), Matt (brother-in-law), Amanda (sister-in-law), Christopher (brother-in-law), Delta (dog), and adoring nieces and nephews Jude, Asher, Josephine, Bo, and Quinn. Food trucks and craft beer companies across the US are devastated by the loss of Todd. A “Celebration of Life” will be held in Denver and Cleveland during the Summer of 2021. In lieu of flowers, donations may be made to Emmy’s education fund gf.me/u/zdjh2h and Reel Recovery (reelrecovery.org).

Todd Justin Steyer died surrounded by his family at home on December 20, 2020 at age 35. To the surprise of many, it was brain cancer that took Todd from us at such a young age and not Todd&#8217;s undying love for questionably sourced... View Obituary & Service Information

The family of Todd Justin Steyer created this Life Tributes page to make it easy to share your memories.

Todd Justin Steyer died surrounded by his family at home on December...

Send flowers to the Steyer family.