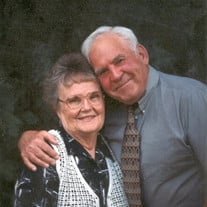 Shirley Ann Rutledge was born on Feb. 21, 1930 in Brock, Nebraska, the daughter of Jesse and Merrill Rutledge. She grew up on a farm in Brock until she was 15 years old. She loved to play with her cousins and dress up her kitty’s. Church was always a big part of her life. Her grandfather was the Sunday school superintendent, and her Mom was the church pianist. In her early teens, she trusted Jesus as her Savior at a church youth camp. When she was 15, her family moved to Loveland, Colorado where her dad had purchased a cherry orchard. She won many cherry pie contests. She loved the mountains and spent one summer working in Estes Park at her uncle’s hardware store. She met her future husband on the steps of the library at the University of Northern Colorado where she was studying to become a teacher. They were married on December 30, 1951 and moved to a small town in California where she began her teaching career. She loved teaching throughout her life. Shirley and Harold had their first two children, Susan and Doug, in California and then moved back to Colorado where their third child, David, was born. Shirley was a devoted wife, mother, homemaker, and a helpmate in her husband’s business. Church was a very important part of Shirley and Harold’s life and she had many fond memories of all of her church friends. Shirley’s Dad instilled in her a love of sports from an early age. She and Harold continued that love of sports. Shirley was known to quite emphatically express her dislike for the opposing team. She also loved watching old movies, and every weekend in her last years, her son-in-law John would bring either one of her favorites or a new oldie for her to enjoy on Friday movie night. She was preceded in death by her parents, and brother Lester Rutledge. She is survived by a daughter, Susan Wilhelm and her husband John of Torrington, Wyoming; a son, Doug and his wife Dawn from Windsor, Colorado; another son, David, from Windsor; nine grandchildren, and fourteen great-grandchildren. Contributions may be made to Berean Bible Church, in care of Bohlender Funeral Chapel, 121 W. Olive, Ft. Collins, CO, 80524.

Shirley Ann Rutledge was born on Feb. 21, 1930 in Brock, Nebraska, the daughter of Jesse and Merrill Rutledge. She grew up on a farm in Brock until she was 15 years old. She loved to play with her cousins and dress up her kitty&#8217;s. Church... View Obituary & Service Information

The family of Shirley Ann Bowyer created this Life Tributes page to make it easy to share your memories.

Send flowers to the Bowyer family.