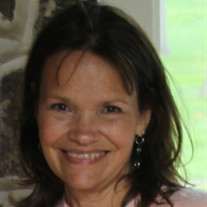 Sherry Rae Grossmann, 70, lost her brief but brave battle with glioblastoma on Nov. 16, 2020, at home surrounded by family. Sherry was born on July 18, 1950, to Wilson and Betty King in Riverside, Calif. Sherry was raised in a loving and close-knit family that included her beloved brother, Keith. Her father Wilson worked for Farmer Bros. and her mother was a homemaker and retailer. The family owned King Western Shop in Riverside which sold saddles, tack and other supplies. Sherry enjoyed riding horses and was part of a horse club where she met her future husband, Richard Grossmann. Sherry and Richard married on Sept. 5, 1970, and after living in several cities in California including La Quinta, Palm Desert and San Luis Obispo, they relocated to Fort Collins, Colo. in the mid-1970s. They had their first child, Garrett, on March 28, 1982. Her daughter Kendal was born March 29, 1985. Sherry was passionate, fierce and creative. Look up the term “Mama Bear” in the dictionary and you will see a photo of Sherry. She was her children’s biggest advocate and had no problem going toe-to-toe with anyone who was disrespectful or unfair to her kids. Sherry didn’t miss an opportunity to tell her children how talented, smart and capable they were and often researched solutions to their problems -- big and small -- into the wee hours of the morning. She was a fixer and a problem-solver. Sherry’s passions were her family, her family and her family. RVing with her husband, brother and cousin; staying at bed and breakfasts with her daughter; trading keto recipes with her son and masterminding landscape projects with her mom, Sherry enjoyed every chance to be with her family. She worked on craft projects with her granddaughter Krista and was ecstatic at the arrival of her grandson Declan. She was a talker, a laugher and a listener. Her smile was contagious and she couldn’t help but be Mom to the World. Anyone who ever worked with her can attest to her desire to support, to solve problems, to listen, to care and to nurture. Sherry’s creative talent was unmatched. No project was too specific or too challenging. From school projects to home renovations to the wedding aisle for her daughter, Sherry made everything beautiful and memorable. She was the architect, engineer and designer for all her home and landscaping projects and loved hearing about other people’s home projects and ideas. Sherry tried many career paths but was an entrepreneur at heart. She worked as a life insurance retention specialist, dental hygienist and real estate agent. For about 20 years, Sherry owned a lawn aeration business with her husband and close friend. But her passion was always visual merchandising for clothing stores. Sherry owned her own business styling windows for independent clothing retailers in Fort Collins after a career in California working for retailers including I. Magnin and Lane Bryant. She made the transition from clothes to furniture and quickly adapted to her new medium, working for local furniture and decor retailers and offering interior design services to clients who wanted to be surrounded by beauty. The holidays brought Sherry’s creative spirit to life. Carving pumpkins for Halloween was an all-day task; she drew inspiration from the shape of the pumpkins she chose and was known for carving intricate designs. She loved designing her Thanksgiving dinner table as much as she loved preparing a memorable dinner for her family. Her Christmas trees belonged in showrooms. Gift giving was her love language; she enjoyed watching Midnight Mass while wrapping gifts on Christmas Eve. She changed her handwriting and wrapped gifts in different paper to keep the magic of Santa Claus alive for her kids. As her children became adults, she continued to wrap gifts with precision and beauty. Her thoughtfulness often influenced her design decisions. When her mother-in-law was moved to a care facility, she made sure her room was styled with familiar and beloved furnishings and decor. She took the same approach when her own mother moved to a memory care facility, putting together a photo album of all her mom’s family members and labeling them in large font for aging eyes to see. In addition to design, Sherry loved to travel and explore. She planned vacations meticulously, getting her travel partners out of their comfort zones to truly explore and discover the areas they visited together. Sherry especially loved visiting historical places and would absorb every word of museum exhibits, study every stroke of paintings and enthusiastically share what she experienced with family and friends. Together with Richard and often her brother and cousin, she discovered the country via RV, kayaking at Painted Rocks, bike riding around Amelia Island, and exploring the vineyards of Napa Valley and Calistoga with her daughter. Closer to home, Sherry was happy to camp along the Poudre River, take extensive walks around Redfeather Lakes, watch her family fish Delaney Buttes and observe the ospreys at Steamboat Springs. To everyone who knew and loved her, Sherry was stunning, unforgettable and irreplaceable. For Richard, her husband of 50 years, Sherry was his muse, his travel planner, his biggest supporter and his partner. She served as his model during his education as a photographer and continued to be his favorite subject during their travels. While Sherry will be missed by all who were fortunate enough to know her, the imprint she left on our hearts will remain. Sherry is survived by her mother Betty (age 98); her husband, Richard; her son Garrett and his wife Leah, and her grandchildren Krista and Declan; her daughter Kendal Perez and her husband Ron and grand-dog Diego; her brother Keith King and his wife Jan; her cousin and best friend Jody Richardson and her husband David; and several cousins, nieces, nephews and their children. No funeral services will be held. In lieu of sending flowers, Sherry’s family has asked that donations be made in her name to organizations close to her heart: the Wounded Warrior Project or the Tunnels to Towers Foundation.

Sherry Rae Grossmann, 70, lost her brief but brave battle with glioblastoma on Nov. 16, 2020, at home surrounded by family. Sherry was born on July 18, 1950, to Wilson and Betty King in Riverside, Calif. Sherry was raised in a loving and... View Obituary & Service Information

The family of Sherry Rae Grossmann created this Life Tributes page to make it easy to share your memories.

Sherry Rae Grossmann, 70, lost her brief but brave battle with...

Send flowers to the Grossmann family.