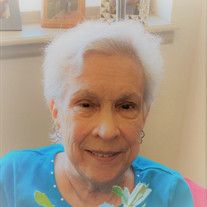 Dear God, Just wanted to send a thank you note for your gift of Sheri Wagner, our beloved animal-loving, shy but talky, compassionate mother, grandmother and friend. You took her a couple days after her 78th birthday after a lengthy battle... View Obituary & Service Information

The family of Sharon Tanya Wagner created this Life Tributes page to make it easy to share your memories.

Just wanted to send a thank you note for your gift...

Send flowers to the Wagner family.