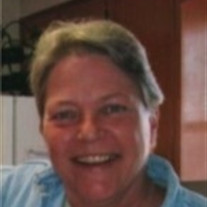 Sharon Ann Vavra – Laporte – 62, passed away after a short illness on January 29, 2020. She was born August 4, 1957, in Kimball, NE to Duane & Donna (Bivens) Vavra and joined big brother Dale and big sister Susan. She grew up in Bushnell, NE & graduated from BHS in 1975. After that she worked at the auto parts store in Kimball until she moved to Fort Collins in 1981. She was currently employed by Martin Marietta as a Weighmaster. While in Fort Collins, Sharon enjoyed playing softball (Panama Reds, Dos Banditos & Laughing Dog) and volleyball (Blue Bayou). She also was a good pool player (Blue Bayou & Match Ups) traveling to Vegas for the large pool tournament there several times. She was a Broncos & Cornhuskers fan. She was married to Billy Maher on January 15, 2010, until his death in 2016. Some things you might not know about her is that she was a good cook, excellent baker and one hell of a demolition car driver. She was proceeded in death by her parents, her brother Dale & his wife Sandy. She is survived by her sister Sue (Jay) Ziegler, her nieces Tammy (Jim) Land, Kelli (Brandon) Chaon and great nephews Brady Land, Dylan (Cody) Haas, Ethan Land, Coby Haas, great nieces Hannah Haas and Addilyn Chaon and great-great nephew Tilden Haas. On Billy’s side she is survived by his sister Kathy (Al) Muzikar, niece Michele (Robert) Grieco, nephew Michael (Erica) Muzikar, great nephew RJ Grieco and great nieces Victoria Grieco and Ariana Muzikar, all of New Jersey. There will be a Celebration of Sharon’s life February 22nd, 1-4, at the American Legion Post #4 Fort Collins, CO.

The family of Sharon Ann Vavra created this Life Tributes page to make it easy to share your memories.

Sharon Ann Vavra – Laporte – 62, passed away after a short illness...

Send flowers to the Vavra family.