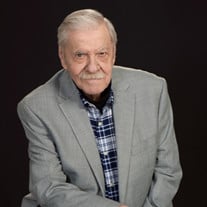 Russell “Russ” Mann, 84, of Fort Collins, Colorado passed away on September 11, 2021 at Poudre Valley Memorial Hospital. Russ was born in Mapleton, Iowa on August 20, 1937 to Lynn (Ted) and Mable Mathison Mann. He grew up in Loess Hills of Iowa. Russ graduated from Pisgah High School in 1955 and went on to attend Omaha University. He was employed by Union Pacific railroad. Russ met the love of his life, Sharon Hancock, in Omaha. They were married in Sharon’s home town of Loup City, Nebraska in 1959. Together they raised two wonderful daughters, Marcia and Gretchen. Russ proudly served his country as a Sergeant E-5 in the United States Army National Guard. He was Honorably discharged in 1962. Russ and his family moved to Fort Collins, Colorado in 1970. He began his career as an apprentice electrician working his way up to Master Electrician and ultimately owned his own company - Jack's Electric. Russ retired and sold the business in 1998. Russ enjoyed camping, fishing and traveling. He always spoke fondly of a special fishing trip he made to Canada with his Fort Collins buddies. One of his favorite places to visit was the Oregon coast where he liked to spend time with family. He was an avid reader, loved to tell stories of the good old days, enjoyed music ranging from Phantom of the Opera to Ray Stevens, and got a kick out of his Norwegian joke books. Russ was a 50-year member of the Elks Lodge #804, a 50-year Member of the Vesper Masonic Lodge #223, and a 50-year member of the Scottish Rite becoming a master mason. Russ and Sharon have been faithful members of Christ United Methodist Church since 1970. Russ is survived by his wife of 62 years, Sharon, his daughter Marcia (Don) Burkhart, his daughter Gretchen Mann, his grandchildren, Lena, Leo and Jadin as well as nieces, nephews and many friends. He was very proud of his daughters and loved his grandchildren. A Memorial Service is planned for 2:00pm, Saturday, October 16, 2021 at Christ United Methodist Church, 301 E. Drake Rd., Fort Collins CO 80525. If you wish, in lieu of flowers, a donation may be made to the Alms Fund at Christ United Methodist Church in Fort Collins, Colorado.

The family of Russell Earl Mann created this Life Tributes page to make it easy to share your memories.

Send flowers to the Mann family.