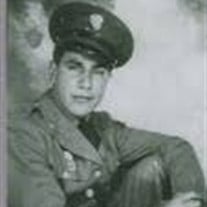 Isaiah 43:1 Fear not sayeth the Lord: for I have redeemed thee, I have called thee by thy name; thou art mine. Rudolph Richard Vargas was born Sept. 27, 1922 in Salina,Kansas to Benjamin and Paula Vargas, and passed away on October 15, 2019 in Las Vegas,Nevada. Rudy was in hospice care at the Marguis Care Facility when he passed away from lung cancer. He was blessed to be surrounded by his wife and family members. Mr. Vargas is survived by his wife of 64 years; Ermelinda Cordova Vargas, a brother, Will Vargas of OK., a son, Andrew Vigil of CO., and daughters, Helen Garcia of CO.,Beatrice Saheli of WA., Madeline Valdez of CA., Paula Cardona of CO., Laurie Vargas and Stevie Morgan both of Nevada. He is also survived by several grandchildren and numerous nieces and nephews. He was preceded in death by his parents,a brother, 3 sisters, and 2 sons, David and Daniel. Mr. Vargas moved to Ft. Collins in 1951, living for a time with the Rojas family. He later met and married Ermelinda Cordova. Due to work and a busy career, he moved to several different towns and states until settling in Nevada. He worked in several areas as a farmhand, in the Salida mine tunnels, as a barber, and several other positions. Rudy retired from the Ft. Collins Fire Department as a dispatcher and later from the VA Medical Center where he worked as a Medical Assistant. After retirement, he served as the Executive Officer for the Boy Scouts and an Advisor to the Salvation Army. Mr Vargas enlisted in the Army in 1942 and was stationed in Hawaii,he was then sent to Guadalcanal as a member of the Infantry Regiment COB 27 Infantry 25th Division. He was wounded in Guadalcanal and hospitalized for three weeks. Afterwards he was stationed in New Georgia where he led his troops, on his 21st birthday to the Solomon Islands, to secure the area. In 1943 he was stationed in New Caladonia where he contracted malaria. He was then sent to New Aucklund, New Zealand to train recruits for combat and was also doing intelligence work serving as a Technical Sergeant. He and his troops were the first wave into the Phillipine's as a landing force, while there he was wounded in both arms. Upon return to the US he worked in the mess halls and was then honorably discharged in 1945. During his service he earned numerous medals of honor and recognition; The Purple Heart The Bronze Star Combat Infantry Badge Good Conduct Medal Asiatic-Pacific medal with six combat stars Phillipine Liberation Ribbon World War II Victory Medal After the war he served as State Commander for the Department of CO. Disabled Veterans where he had been a member of the Disabled Veterans since 1946. Also serving as a member of the National Executive Committee, meeting both Presidents G.W. Bush and Bill Clinton during his tenure A graveside service, followed by a reception at the local VFW, with be held in Ault, Colorado.

Isaiah 43:1 Fear not sayeth the Lord: for I have redeemed thee, I have called thee by thy name; thou art mine. Rudolph Richard Vargas was born Sept. 27, 1922 in Salina,Kansas to Benjamin and Paula Vargas, and passed away on October 15, 2019... View Obituary & Service Information

The family of Rudolph Richard Vargas created this Life Tributes page to make it easy to share your memories.

Send flowers to the Vargas family.