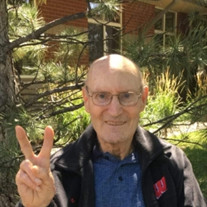 Roy Edward Arterburn passed peacefully on Friday, December 25th in his home on Terry Lake surrounded by the love of his wife Evie Hoeven and his three-generation extended family. Roy was born on March 19th, 1932 in Independence, MO. He spent his youth adventuring in the outdoors, hunting morel mushrooms, deer and ducks and fishing for anything that would take his bait. Roy’s true passion as a youth was baseball. He played competitively through his teen years and earned a tryout with a farm team for the St. Louis Cardinals. It was Roy’s aptitude and intelligence in mathematics which gained him a commission to the US Naval Academy, where he was roommate and math tutor to future Apollo astronaut Bill Anders, whom Roy jokingly said owed everything he accomplished to Roy’s tutelage. Roy went on to study at the University of Kansas where he earned his degree in Electrical Engineering. During his time at the University of Kansas Roy began dating and shortly thereafter married his longtime friend from Independence, Carol Cook. After completing his degree, Roy served in the US Army Reserve initially at Fort Leonard Wood and later teaching radio repair at Fort Gill. Upon Leaving the Army, Roy started his career in technical sales working for General Electric and Texas Instruments before starting his own company in Milwaukee, Schreiber/Arterburn Electronics, where he excelled primarily at wooing and entertaining clients with season tickets to both the Packers and the Brewers. Roy retired in 1999 and he and Carol set off to find their retirement destination. They visited Ft. Collins and fell in love with the town and the opportunity to play golf year round. Once settled in Ft. Collins, Roy started a couple’s golf league at Southridge that he ran for twenty plus years and which still, continues to meet and play every Monday morning as “Roy’s Couples Golf League”. In 2000, Carol passed unexpectedly. Among Roy’s most proud endeavors, he spent over twenty years volunteering at Poudre Valley Hospital and served as the Volunteer representative for the Hospital Board. His tenure brought a new mammogram machine, among other equipment, to PVH. He touched the lives of many nurses, docs and staff throughout the hospital and was recognized on each of his visits over the past several years. Roy met Evie Hoeven when she subbed in the golf league as his partner. The two wed in September 2001 and spent the next 19 plus years playing golf in the Southridge league and as members of the Fort Collins Country Club, traveling the world and learning to dance as stipulated by Evie in their pre-nuptial agreement. Roy appreciated everyday he lived and all the people he met along the way. He continued living life to its fullest with recent trips to Las Vegas for the Mountain West basketball tournament, to his villa in Puerta Vallarta and to Houston to visit his sister. Roy was preceded in death by his parents James Arterburn and Ellen Barron Arterburn and his sister Jeannine McKain. He is survived by his wife Evie Hoeven, her children and grandchildren, his children Lisa Schoenfeld and her husband Randy, Lynn Helstad and her husband Scott, Steven Arterburn and his wife Deneice, grandchildren Renee Taft, Benjamin Helstad, Sonja Helstad, Nicolas Arterburn, Megan Arterburn and great grandchildren Christian Taft and Saren Maddern. A celebration of life will be held at some point the summer or fall of 2021, hosted by the Mishawaka (Roy was particularly proud of having the Mish in the family), when it is safe for all of the people who shared in Roy’s joy of life to gather together. In lieu of flowers, please make contributions to the Poudre Valley Hospital Volunteer. Memories and condolences can be shared with the family on the Bohlender funeral home website.

Roy Edward Arterburn passed peacefully on Friday, December 25th in his home on Terry Lake surrounded by the love of his wife Evie Hoeven and his three-generation extended family. Roy was born on March 19th, 1932 in Independence, MO. He spent... View Obituary & Service Information

The family of Roy Edward Arterburn created this Life Tributes page to make it easy to share your memories.

Send flowers to the Arterburn family.