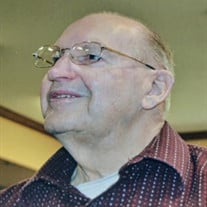 Ronald Wayne Bradford, 86, passed peacefully from this life to the next on July 14, 2020 at Good Samaritan Loveland Village, in the Heritage Square memory care unit where he lived since 2015. Ron, the 3rd of 6 children, was born in Earlville, Illinois on 8/25/1933 to Dwight Bradford and Clair Billington Bradford. The family moved to Michigan in 1934. In 1946 they moved to a cattle ranch in Hill City, South Dakota where Ron lived the life of a true cowboy. In 1950 the family moved back to Michigan, where he graduated from Muskegon High School in 1951. Ron served in the US Air Force as an Armaments Mechanic from 1951 -1955. He was stationed in Korea in 1952-53 and was honorably discharged in 1955. He married Donna King on 2/2/1968. They made their home in Fort Collins, CO with her two children, Kim, and Troy. Ron worked in accounts receivable as a Control Specialist from 1973 until his retirement from Poudre Valley Hospital, Fort Collins, CO in 1998. Ron was a member of Meadowlark Church of Christ since 1968 where he served as treasurer for 10 years. He was the secretary for the Weld Country Fish and Game Association. He also served on the Poudre Valley Hospital board and was instrumental in helping implement better employee benefits. Ron was an avid outdoorsman and a cowboy at heart. He won many 1st place awards in Bench Rest Rifle shooting competitions. He was a hunter, fisherman, hiker, boater, water skier, motorcyclist, bicyclist, and adventurer. He was a great pool player, a formidable poker player, and won many bowling competitions. He also loved listening to music, especially cowboy songs, and swinging to the beat. Ron had a sweet, caring spirit and a delightful sense of humor that never left him. He will be greatly missed and remembered often by family, friends, and his care givers. He was preceded in death by his father, mother, an infant brother, his sister Wanda, and his wife Donna. Ron is survived by his stepdaughter Kim, 3 sisters – Beverly, Karen, and Wanda, and his nieces and nephews.

Ronald Wayne Bradford, 86, passed peacefully from this life to the next on July 14, 2020 at Good Samaritan Loveland Village, in the Heritage Square memory care unit where he lived since 2015. Ron, the 3rd of 6 children, was born in Earlville,... View Obituary & Service Information

The family of Ronald W. Bradford created this Life Tributes page to make it easy to share your memories.

Ronald Wayne Bradford, 86, passed peacefully from this life to...

Send flowers to the Bradford family.