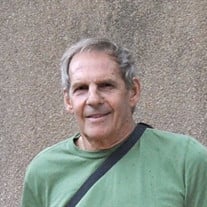 It is with deep sadness that we announce the passing of our beloved husband, father, brother and friend Bob. He passed away as a result of a heart attack suffered at his home in Fort Collins on Friday, March 20th, 2020. He was 75. Bob was born on September 22nd, 1944 at Fort Bragg, NC just three days before his father shipped out to Europe during WWII. Bob was the oldest of his two surviving siblings, brothers Bill and Jim. His early years were spent in Gunnison, CO. By the start of 7th grade, the family had moved to Grand Junction, CO, where Bob graduated from Grand Junction High School. He began his college education at CU, Boulder, then transferred to Mesa in Grand Junction. He completed his formal education at CSU with a Master of Science Degree from the Department of Rangeland Ecosystem Science. He retired in 2006 after working many years for the City of Fort Collins. During his college days, Bob worked for the US Forest Service each summer, working for the Gunnison National Forest in Crested Butte, CO, where he met his future wife, Betsy. Together they had two sons, Bryan and Devin, that they raised in Fort Collins. Crested Butte has remained an important part of their lives. Bob was an avid handball player and loved spending hours with his handball buddies playing, drinking beer and enjoying raucous humor. He relished quality time with friends he met through work and the world at large. Bob played numerous musical instruments over the years including cornet, piano, guitar, banjo, Native American flute and even bagpipes. He also enjoyed reading and learning. Favorite subjects were Native Americans, the Southwest, wildlife, geographic regions and historical times and places. Spending time in the great outdoors of Colorado with family and friends was especially important to Bob. He loved camping, hiking and snowshoeing and even climbed all 54 of Colorado’s fourteeners. He spent quality time with his family and dogs in the Crested Butte area and numerous areas in the Southwest. He loved traveling to mountainous countries including New Zealand, the Alps in Europe, and Machu Picchu in Peru. He also made multiple expeditionary trips to Alaska. As an avid photographer, Bob left a wealth of pictures to remember these adventures. Bob will be greatly missed and remembered fondly by his family and friends. His dry wit, sharp intellect, adventurous spirit, love of a good laugh and generous ways with those he held dear will live on with all those he touched along his life’s journey… Due to the Coronavirus Pandemic, a celebration of Bob’s life will be planned and held at a later date. In lieu of flowers, or as Bob would say, “Do NOT send us flowers,” please donate to a worthy animal or environmental cause. These were causes of special importance to Bob.

It is with deep sadness that we announce the passing of our beloved husband, father, brother and friend Bob. He passed away as a result of a heart attack suffered at his home in Fort Collins on Friday, March 20th, 2020. He was 75. Bob was born... View Obituary & Service Information

The family of Robert Thomas Zakely created this Life Tributes page to make it easy to share your memories.

It is with deep sadness that we announce the passing of our beloved...

Send flowers to the Zakely family.