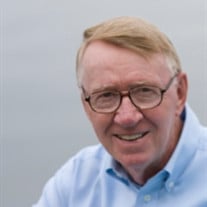 Robert Carl Wallin, 87, died at his home in Fort Collins, Colorado on Saturday, February 5, 2022. Born on July 8, 1934, Bob grew up in Hornell, New York, the son of Edward and Mary Wallin. Bob was a graduate of Niagara University and completed a Master’s program in Education at SUNY Geneseo. In 1960 he married Ann Marshall and settled in Clarence Center, New York. Bob taught English at Clarence Junior High School for 35 years before retiring to Greensboro, North Carolina. In 2004, Bob and Ann moved to Fort Collins where they were closer to family and enjoyed the natural beauty of Colorado. Bob is survived by his daughter Kim Cahill and son-in-law Gregory of South Berwick, Maine, his daughter Julie Wallin and son-in-law Dana Winkelman of Fort Collins, Colorado, and his brother Richard Wallin of Hamilton, Ohio. Bob will be fondly remembered by his three grandchildren, Rennie Winkelman, Katie Winkelman, and Jack Cahill, who affectionately knew him as “Poppi”. He will also be fondly remembered by his friends, his nephew and nieces, and his extended family. He was predeceased by his beloved wife Ann, whom he most dearly missed, and four siblings. Bob grew up hearing the constant whistle of the engines and rumble of trains as they travelled day and night through the Erie Railroad Depot in his hometown of Hornell, New York. His father worked for the railroad for over 50 years, and as a child, Bob frequently travelled by train with his family to destinations across New York State and as far as Chicago. As a young man, he travelled by train back and forth between Hornell and Buffalo, NY while he attended Niagara University. This connection to trains translated to a love for travel in adulthood, and he and Ann enjoyed many happy trips to the Rocky Mountain States, California, Washington State, British Columbia, Alberta, and around New England States and Ontario. Although in his later years he lived in North Carolina and Colorado, “home” in Bob’s heart was always western New York. In lieu of flowers, we ask that Bob’s friends and family share their condolences or a fond memory on the Tributes Wall of this site. You may also view Ann's obituary at https://www.bohlenderfuneralchapel.com/obituaries/Ann-Wallin/.

Robert Carl Wallin, 87, died at his home in Fort Collins, Colorado on Saturday, February 5, 2022. Born on July 8, 1934, Bob grew up in Hornell, New York, the son of Edward and Mary Wallin. Bob was a graduate of Niagara University and completed... View Obituary & Service Information

The family of Robert C. Wallin created this Life Tributes page to make it easy to share your memories.

Send flowers to the Wallin family.