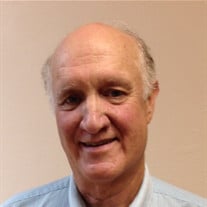 Robert A. Palmer went home to his Lord and Savior Jesus Christ, November 15, 2019. Robert was born September 30, 1945 to parents Kenneth and Mary Palmer. Robert was baptized at age 10, was a Boy Scout obtaining the rank of Eagle and Order of the Arrow, graduated Fort Collins High School, 1964. Graduated 1969, Colorado State University, Bachelor of Science Degree, Construction Management. He married Linda C. Porterfield, the love of his life, on September 9, 1967. Moved to Kansas City , Missouri in 1969. He was recruited by the Department of Defense, Atomic Energy Commission, Kansas City, MO as a team member miniaturizing the Nuclear Bomb. Took classes toward a Master’s Degree in Business Administration, Missouri State College. Daughter Elise, born in 1969 and son Scott born in 1972. The family moved back to Fort Collins in 1973, employed by Kodak of Colorado as Project Manager of New Construction. Later, Robert and wife began a business as owner/managers/growers in the Green Industry, growing, selling plants retail and wholesale to supermarkets, home centers and florists in Colorado and Wyoming. Robert obtained a Master’s in Principles of Technology Education. Robert as a Senior Consultant for Capital Improvement, Department of Education, State of Colorado, traveled the state to rural school districts to assess the needs for state funds to improve school structures. Robert later was a Project Manager in the Facilities Department for the City of Fort Collins. His projects included helping to secure grants for Not-for-Profit organizations and supervising the renovations, such as Larimer County Food Bank, Respite Care, Catholic Charities Northern, Women's Safe House, projects using CGB funds, and many more. He also supervised renovations of City Buildings and facilities and Historical Society's projects, worked with the City Library to covert a reading to brail. At Aimes Community Collage in Greeley Robert established the Construction Management Program. He developed courses according to the State of Colorado's Higher Education Department's requirements and guidelines for accreditation to transfer into four year universities. He interfaced with private industry to assess needs to establish the courses. He taught Engineering courses such as Statics, Strength of Materials, Surveying, mathematics relating to engineering, and many other courses. He also was an OSHA trainer certifying students. Robert was a Reviewer and Register of universities' Construction Management programs though the American Council for Construction Management Education based in Texas. He traveled with a team to universities to assess and register their construction education programs and advise for improvements in the programs. Robert transferred to Front Range Community College, Fort Collins. Basically, repeating his responsibilities he had at Aimes Community College. He loved teaching the students and has felt that they were one of the highlights of his life. Many of his students and department heads related how amazing that one person had the experience and expertise to teach such a wide variety of technical courses. Robert retired at age 70 from Front Range Community College. Since retiring, among other things, has enjoyed camping RV, traveling, visiting son and family in Washington state, many wonderful times with our daughter and her family here in Fort Collins. Robert is survived by Linda his wife of 51 years, children Elise Staats (David) and son Scott Palmer (Jennifer) plus 5 grandchildren. Robert is survived by his sister Pam Thorne and family, sister-in-law Ellen Gobin (Jack), Karen Fulcomer (Edward) and many nephews and nieces, wonderful friends. In Lieu of flowers, donations may be made to either Faith Evangelical Church in Loveland or Pathways Hospice. A Memorial Service will be held at 2:00pm on Saturday, November 23, 2019 at Faith Church, 2707 Wilson Ave., Loveland 80538.

Robert A. Palmer went home to his Lord and Savior Jesus Christ, November 15, 2019. Robert was born September 30, 1945 to parents Kenneth and Mary Palmer. Robert was baptized at age 10, was a Boy Scout obtaining the rank of Eagle and Order... View Obituary & Service Information

The family of Robert A Palmer created this Life Tributes page to make it easy to share your memories.

Robert A. Palmer went home to his Lord and Savior Jesus Christ,...

Send flowers to the Palmer family.