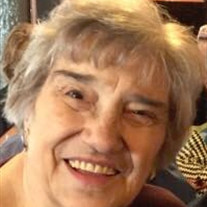 Visit the following link to view Rita's slideshow. https://youtu.be/UOTFOEFx41Q Rita M. Koch, 83, of Fort Collins, died December 7, 2020 peacefully in her own bed in her own home, exactly like she wanted it. Rita was born Dec. 16, 1936 in a small farmhouse just outside of Barada, NE. She attended District 18 / Fike Country School, graduating 8th grade in 1949. Growing up, Rita and her family were members of St. Anne’s Catholic Church in Shubert, NE. She attended Sacred Heart High School in Falls City, NE 1949-1953, graduating at 16. Rita was a student at Loretto Heights College in Denver for a year. At 24, Rita went to the Maryknoll Convent in Missouri. She liked the daily schedule, but left the convent at the age of 25. Rita attended Creighton University in Omaha, NE, graduating with a Bachelor of Arts degree in History in 1966. Following graduation, Rita went on a 3-week European trip. Shortly after, she answered an ad in the paper which read, “Teachers Needed in Alaska.” While in Alaska, Rita survived the 1967 flood in Fairbanks. After living through a robbery in a small jewelry store in Anchorage, she got up, bought something and left. In Anchorage, Rita met John G. Koch. They married Oct. 10, 1970 at Sacred Heart Catholic Church in Lincoln, NE. Rita began her secretarial career in 1951. She retired from her position as a legal assistant from Hill & Hill Law Firm (Fort Collins) in the late 1990s. She donated to many, many charities including a substantial donation to The Chesterton Academy of St. John Paul II, the first Catholic High School in Northern Colorado. While working with Catholic Extension volunteers in her mid-20s, Rita learned to play bridge in Buffalo, Oklahoma. Rita Koch was a Silver Life Master in the American Contract Bridge League. She traveled regularly to Cabo San Lucas, Mexico. Rita is preceded in death by her mother and father and three of her four siblings as well as by her husband, John G. Koch. Rita is survived by her sibling, Janice Rose; her daughter, Laura Koch and her son-in-law, Andrew Vogt; her son, Jason Koch and her daughter-in-law, Hwaling Coffey, and their three children, Jaeling, Meilan, and Kainan Coffey Koch. A Private Rosary, Mass of Christian Burial, and Interment will be held at a later date. In lieu of flowers, please make donations to The Chesterton Academy of St. John Paul II, the first Catholic High School in Northern Colorado at https://chestertonjpii.org/donate

Visit the following link to view Rita's slideshow. https://youtu.be/UOTFOEFx41Q Rita M. Koch, 83, of Fort Collins, died December 7, 2020 peacefully in her own bed in her own home, exactly like she wanted it. Rita was born Dec. 16, 1936 in... View Obituary & Service Information

The family of Rita Marie Koch created this Life Tributes page to make it easy to share your memories.

Send flowers to the Koch family.