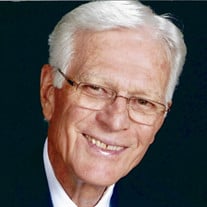 Rae M. Batch, 90, formerly of Fort Collins, was received into God's glory on October 10, 2021, at The Gardens on Quail Assisted Living and Memory Care in Arvada, Colorado. He was a native of Helena, Montana, the oldest son of Raymond P. and Irene L. Batch. Rae attended Kessler School, graduated from Helena High School and Carroll College of that city, and married his high school sweetheart, Myrtle Louise Duncan, also of Helena. Following his graduation from Carroll College with a degree in Business/Finance and Communications, he began a 33-year career as an apprentice central office equipment installer for The Mountain States Telephone and Telegraph Company in Helena. He served in Glendive, moved to Great Falls as a commercial representative, was transferred to Glasgow, Montana, where he was assigned to work with the Air Force on telecommunications for a new air base. When those plans were delayed, he was moved to Helena, and worked in independent company relations and rates and forecasting. In 1960, he became the Manager in Miles City, Montana. Transfers to Billings, Helena, and Missoula followed until his move to Denver in 1967. In Denver, he was a corporate offices staff manager and customer services manager until his promotion to District Manager in Riverton, Wyoming. In 1979, he transferred to Casper, and was the Area Manager responsible for customer service, independent company and community relations for the northern half of Wyoming. In Casper, he was an active member of the Chamber of Commerce, the Rotary Club, and Casper Symphony Board of Directors. Faced with corporate downsizing and a possible transfer, he chose early retirement in Casper in March 1987. He and Myrt-Louise moved to Fort Collins in June 1989. As a boy, he learned fly fishing with a hand me down bamboo rod made from the left-over parts of several. Fly fishing along Sixteen Mile Creek, the Madison River, and the Little Blackfoot River were special "Dad and Son" events, and he was a pheasant hunter with his Golden Retriever dog. Rae seldom used his middle name, Marius, but was proud of the legacy of his paternal grandfather, Christian Marius Batch, a native of Denmark who came to America in 1887, opened a tailor shop, and became one of Helena's leading merchants. Rae's boyhood in Helena included baseball and playing clarinet and saxophone through high school and college, where he led the Carroll College pep band and a dance band called "The Rhythmaires". He played varsity baseball and worked part time in a lumber yard and for the Montana Highway Department. During his senior year at Carroll, he was recognized as a Distinguished Student in Who's Who Among Students in American Universities and Colleges. A longtime member of The United Methodist Church, he cherished his servanthood in the local church and at the district and conference level. As a Certified Local Servant, he was often a liturgist during worship services, preached and led worship in nearby churches, and taught lay servant classes in the Peaks Subdistrict. After shelving his clarinet for over 40 years, he became a founding member of The Stover Street Stompers Dixieland Jazz Band, a music ministry of The First United Methodist Church. The band plays spirituals, gospel songs, traditional hymns, and Dixieland jazz during worship services for churches of several denominations, for weddings and funerals, and for community and charitable organizations in Northern Colorado. The loves of his adult life were his wife and family, his church, fishing, hunting, golf, and tending to the yard and flowers. Although Montana was always "home", Rae also loved the quiet solitude, pioneer history, and fishing and hunting in Wyoming. He is preceded in death by Myrtle-Louise, his loving wife, and hunting, fishing, and life partner of over 67 years. They are parents of two children, Carol Rhae (Leland) Nelson of Las Vegas, Nevada, and Steve (Martha) of Arvada, Colorado. Grandchildren: David Nelson, Colorado Springs, Colorado, Leslie (Nelson) Page, Las Vegas, Nevada, Caitlin (Batch) Small, Littleton, Colorado, and Mallory (Batch) Barnes, Trenton, Texas. There are nine great grandchildren, Luke and Kyle Nelson, Brandon, Evan, and Ryan Page, Millie Grace and Harrison Small, and Lyla Rhae and Baylor Rene' Barnes. Rae's parents, Raymond and Irene Batch, and brother Robert also preceded him in death. Rae served in The United States Army and was honorably discharged as a Master Sergeant from the US Army Reserve. A celebration of Rae's life will be held at First United Methodist Church in Fort Collins on Thursday, October 28th at 11:00 am. The family requests memorial gifts to First United Methodist Church, Fort Collins, or to Rocky Mountain Conservancy, Box 3100, Estes Park, CO 80517. Online condolences and memories of Rae can be sent to bohlenderfuneralchapel.com

Rae M. Batch, 90, formerly of Fort Collins, was received into God's glory on October 10, 2021, at The Gardens on Quail Assisted Living and Memory Care in Arvada, Colorado. He was a native of Helena, Montana, the oldest son of Raymond P. and... View Obituary & Service Information

The family of Rae Marius Batch created this Life Tributes page to make it easy to share your memories.

Rae M. Batch, 90, formerly of Fort Collins, was received into...

Send flowers to the Batch family.