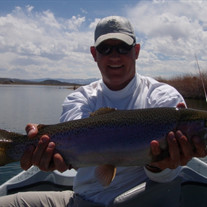 Peter “Judson” Standard, son of late Dr. Peter Standard and late Sharon Frazee Standard was born February 22, 1971 in Springfield, Missouri. An only child, his family moved to Fort Collins in the 1970’s. He graduated from Poudre High School in 1989 and Colorado State University in 1993. He enjoyed a few years in Hawaii as he earned a certificate in Oceanography and then returned to Colorado in 1996. He decided to pursue a career in healthcare, and attended the University of Colorado earning both an MBA as well as a Masters in Health Administration in 2003. Judson married his wife of 22 years, Melissa Erin Palmer on February 6, 1999. They were blessed with two beautiful children, Logan Alexa Standard and Reid Jackson Standard. Throughout his career, Judson balanced a busy schedule, running the operations of multiple medical practices while raising his children, supporting them in any one of their multiple endeavors. He developed a passion for coaching. Whether it be a football field, a basketball court or softball field, he truly loved watching his children compete. In his spare time, you could find him rod in hand on a river, accompanying his wife walking at least one of their beloved canines, on a golf course complaining that his 400+ yard drive “wasn’t that far”, or memorizing a movie line to repeat later to one of his many friends. Judson was part of an extraordinary group of young men who have maintained a longstanding friendship. It is these men and their families with whom Judson and his family continued to make so many memories through the decades. As an only child, these friends were nothing less than brothers, and he held them all in the highest regard. Judson’s 6’5” frame was matched only by his larger-than-life personality. He was warm, kind, and loved advocating for those who needed extra assistance or help making a connection. He was charming, generous and comforting, always one of the first to open his arms and wrap them around anyone who needed support. His smile would crinkle the corners of his eyes and light up a room. He was taken without warning on Sunday, March 29th, and his loss leaves a massive hole in the lives of everyone who loved him. He will be dearly missed. Judson is survived by his aunt, Julia Standard of Macomb, Illinois, his cousin, Laura Kempher or St. Louis, Missouri, his uncle, Michael Frazee & cousins Thomas & Heather Frazee of Oahu, Hawaii. He leaves behind his wife, Melissa Standard and their two children, Logan Standard, 18, attending school at the University of Colorado, and Reid Standard, who resides with his mom in Timnath, Colorado. A celebration of life event will be held in June of this year, details to follow at a later date. In lieu of flowers, please consider donating to the American Heart Association or the Larimer County Humane Society.

Peter &#8220;Judson&#8221; Standard, son of late Dr. Peter Standard and late Sharon Frazee Standard was born February 22, 1971 in Springfield, Missouri. An only child, his family moved to Fort Collins in the 1970&#8217;s. He graduated from Poudre... View Obituary & Service Information

The family of Peter Judson Standard created this Life Tributes page to make it easy to share your memories.

Send flowers to the Standard family.