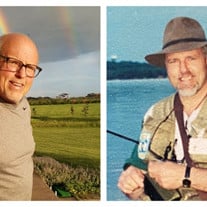 Peter John Harris, age 69, best friend, soulmate, avid hunter, fishing god, husband, dedicated professional, role model, mentor / coach, and father of three children peacefully passed away on June 2, 2020 at his home in Loveland, Colorado after a lengthy battle with Ataxia and multiple system atrophy. His loving wife, Peggy (Buhr) Harris, stayed by his side 47 years and was his true champion in his fight against his illness. Peter and Peggy’s love for each other was unmatched and a guiding example of a successful marriage. He was born on November 14, 1950, in Hillsboro, Wisconsin, to Earl Clifford Harris and Barbara (Cesnik) Harris. Peter grew up on a farm near Hillsboro, Wisconsin. He graduated from Hillsboro High School in 1969. Following graduation from high school, Peter attended the University of Wisconsin-La Crosse, La Crosse, Wisconsin majoring in Parks and Recreation Management. He graduated in 1973 with a Bachelor of Science degree. Peter married Peggy Ann Buhr on August 25, 1973 in Juneau, Wisconsin. Following marriage, Peter became Park and Recreation Manager for Neenah, Wisconsin and then the City of Ashwaubenon where he worked for over ten years. He then made a career change and served 29 years as a marketing and project sales executive for Foth and Van Dyke, STS Consultants, and AECOM. Peter was an avid outdoorsman with fly fishing as his true love and passion. He was a member and past President of the Green Bay area’s Trout Unlimited chapter. He loved to go hunting with his immediate family. The annual deer hunting season was a special time for him to hunt with his sons, brother, and nephews. Peter was very athletic and won many trophies in playing handball and other sporting activities. Peter never turned down an opportunity to lend a helping hand. He was a go-getter, a doer, a person who loved through action. He was a man of integrity and was friends with everyone. His kindness and thoughtfulness never ceased to amaze and his love for his family surpassed all bounds. He never complained about his circumstances and was thankful for all he had. Peter was preceded in death by his parents, Earl and Barbara Harris; in-laws, Laverne and Arlouine Buhr; sister-in-law, Gail Buhr; and nephew, Blake Buhr. Peter is survived by his spouse Peggy of Loveland, Colorado; three children: Angela (Andrew) Mills of Fort Collins, Colorado; Luke (Julia) Harris of Overland Park, Kansas; and Matthew (Raquel) Harris of Chapel Hill, North Carolina. He is also survived by eight grandchildren: Nadia Mills, Eva Mills, Olivia Harris, Sabrina Harris, Fiona Harris, Claudia Harris, Breckin Harris, and Ever Harris. One brother, Paul Harris (Rita) of La Crosse, Wisconsin and one sister, Mary (Glenn) Barrowman of Florissant, Colorado and many nieces and nephews. Due to the Covid-19 virus restrictions, a private family ceremony is planned for Thursday, June 11th. A celebration of life for relatives and friends will take place in Wisconsin in the summer of 2021. For the past five years, Peter was active in the National Ataxia Foundation and participated in yearly fund-raising events to support research in the treatment and prevention of various forms of ataxia. In lieu of flowers or gifts, the family asks that you make a donation in his honor to the National Ataxia Foundation (https://www.facebook.com/donate/722385088497389/10220941802788355/). Peter could bring a sense of humor to all situations and his faith was his guiding light and foundation for his family. Remembering Pete will be easy. Missing him will be a heartache that will never go away

The family of Peter J Harris created this Life Tributes page to make it easy to share your memories.