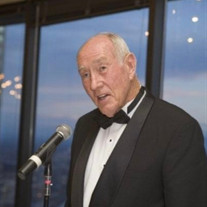 Paul L. Wagner, a resident of Fort Collins, CO since 1975, died on December 11, 2021, after a strenuous six-year match with the Alzheimer’s disease. Born on February 27, 1933, in Culbertson, NE, Paul is remembered by many as being larger than life, whether on the tennis court or in business negotiations. Friends and family were not surprised by his determination to face Alzheimer’s head on. Early in his diagnosis, he decided to focus on the positive aspects of life and participated in the Biogen Emerge study, aimed at slowing the progression of Alzheimer’s. Life on the Wagner family farm instilled tenacity, energy, work ethics and problem-solving abilities that Paul utilized throughout life. Always competitive in sports and in business, his generosity and humor prevailed with family, friends, and those in need. Over the course of some fifty years, Paul built a thriving family business, providing affordable and well-maintained housing in the Capitol Hill area of Denver. Paul was a familiar presence in Downtown Fort Collins, after purchasing and beginning the renovation of the vacant Avery Block at the intersection of College and Mountain in 1977. His first and most onerous task was evicting the only tenants of the building, the hundreds of pigeons inhabiting the roof. Kearney State Teachers College (now UNK, the University of Nebraska at Kearney) was pivotal to Paul’s life journey. There he made lifelong friends, played football and excelled in debate before graduating in 1958. Mid-college, he enlisted in the Army and spent two years in Korea, where he enjoyed sitting on the dirt streets to engage in animated conversations with the residents of the Korean countryside. In order to assist students like himself, from small Nebraska school districts, Paul established the Opportunity Fund Scholarships at his alma mater nearly 20 years ago and made provisions for the fund to continue into the future. A staunch Republican (with some Bernie Sanders’ values,) Paul wanted to assist UNK graduates in embarking on their post-college careers debt free. Paul, the youngest of the four Wagner siblings, is preceded in death by his parents Frank and Pauline Wagner, brothers Francis and George Wagner and sister Irva Butherus. He is survived by his wife of 52 years, Karen, daughters Lisa Wagner Erickson and Michelle Wagner Rice and granddaughter Ila Mae Rice, all of whom he supported in their every endeavor. A memorial service will be held in June 2022 at the family home in Fort Collins. Until then, memories and remembrances of Paul can be posted at https://bohlenderfuneralchapel.com/obituaries. Contributions to the scholarships Paul established should be made payable to the Nebraska University Foundation, designated for the UNK Opportunity Fund, and mailed to PO Box 2678, Kearney, NE 68848 or contributed online at https://nufoundation.org/fund/01078390.

Paul L. Wagner, a resident of Fort Collins, CO since 1975, died on December 11, 2021, after a strenuous six-year match with the Alzheimer&#8217;s disease. Born on February 27, 1933, in Culbertson, NE, Paul is remembered by many as being larger... View Obituary & Service Information

The family of Paul Leland Wagner created this Life Tributes page to make it easy to share your memories.

Send flowers to the Wagner family.