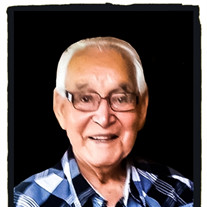 Rev. Deacon Nick Santos, 96, passed in Fort Collins, CO on February 8, 2020 surrounded by his family. He was born in Tulsa, OK on May 18, 1923. At the age of 22, he married Eleanor (Lila) Mosqueda on May 19, 1945 at Holy Family Church in Fort Collins. In 1948, Nick headed to the West Coast seeking employment and eventually landed in San Jose CA, where he established his loving family and worked in the steel industry for over 37 years. In addition to his relentless dedication to his family and career, Nick was ordained as a Deacon at St. Mary’s Cathedral in the Roman Catholic Archdiocese of San Francisco. After 15 years of service to God, he retired and returned to Fort Collins. He continued to volunteer his service at Holy Family Church for 20 years. During Deacon Nick’s service to God and his community, he baptized over 1200 babies, including his grandchildren and counseled and married over 1,000 couples. On March 5, 2016, Nick retired as a Deacon from Holy Family Church. Simply put, Deacon Nick enjoyed life to the fullest. Faith came before anything and his love for his family was unwavering. Nick’s passion for music and dance carried throughout his later years. So much so that he and his crew, the “S.O.A.P. Troupe”, performed in 2 annual programs at the Fort Collins Senior Center for several years. Deacon Nick came from a family of twelve; 4 sisters and 7 brothers. He and his wife Lila raised 8 children; Kathy (husband Robert BZ Zurich) Daniel, Rita (husband Roberto Armendariz), Wally, Joseph (wife Jessica), and Renee (husband Robert Agboyani) and he leaves behind several grandchildren and great grandchildren. Nick was preceded in death by his loving wife, Lila Santos; son, Ronald and daughter, Linda. The family would like to extend their gratitude to the entire staff at Good Samaritan Society- Fort Collins Village for the exceptional care and love they gave our father. A Rosary will be held 7 p.m., Thursday, February 13, 2020 at Bohlender Funeral Chapel. The Mass of Christian Burial will be held 10 a.m., Friday, February 14, 2020 at Holy Family Catholic Church. Interment will follow at Resthaven Memory Gardens Cemetery.