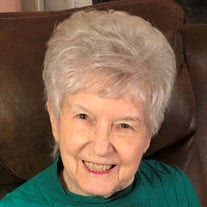 Naomi Ruth Grandy, age 90, passed peacefully in her home on August 2. She is preceded in death by her husband, Bill Grandy, parents Conrad and Alvina Huber, grandson, Brandon Lucio, and the father of her children, Jerry Purcell. She is survived by her three children, Deborah Purcell, Chuck Purcell (wife Jada), and Mike Purcell (wife Kathy), her sister, Eleanor Smith, and her brother, Robert Huber. She was the very proud grandmother of three surviving grandchildren, Vanessa Lucio, Audra Panik, and Lucas Purcell, and four great-grandchildren, Eliana Lucio, Natalia Lucio, Brenan Panik and Laine Panik. She was born to Conrad and Alvina in the small town of Bovina at a time when it was tough to be a farmer in Eastern Colorado. But she was proud to say that their parents never let them go without, even during the Great Depression. Naomi graduated valedictorian of the Arriba High School class of 1948 and went on to Colorado State Teacher’s College where she met the man she would marry, have her three children with and spend 20 years as an Air Force officer’s wife. She spent the early part of her married life as a homemaker and actively supported her children’s activities from piano lessons and Scouting to Little League. She was a skilled seamstress and sewed everything from drapes for the home, Halloween costumes for her kids, Fasching (German Carnival) costumes, and many clothes for herself and Deborah. Her love of sewing inspired her to become a partner in the ownership of the “Stretch and Sew” fabric shop in downtown Ft Collins. Naomi had many other hobbies over the years which included candle making, various other crafts, and bridge club. Throughout her life, she was an avid reader. She was accomplished at cross stitch and the winner of most card games! Her famous fried chicken was in high demand—so much so that she was once told she should open a restaurant featuring her chicken. Her three children learned many of her recipes and their love of cooking from their Mom but none of them ever quite mastered her fried chicken. She seldom used a cookbook and was able to put together a beautiful dinner at the last minute when called upon to do so. One such meal was preparing and serving a last-minute, full turkey dinner with all the accompaniments at midnight. Naomi moved to Prescott, AZ in 2007, met William (Bill) Grandy and they were married in 2008. They spent a wonderful decade together until Bill passed in 2019 and Naomi returned to Ft Collins and the Rocky Mountains she loved so much. Anyone lucky enough to be loved by her can tell you she never forgot a birthday or special occasion by sending a card to let you know she was thinking of you. She will be missed by many. In lieu of flowers, the family asks that you make donations to Halcyon Hospice & Palliative Care in care of Bohlender Funeral Chapel, 121 W. Olive St. Fort Collins, CO 80524.

Naomi Ruth Grandy, age 90, passed peacefully in her home on August 2. She is preceded in death by her husband, Bill Grandy, parents Conrad and Alvina Huber, grandson, Brandon Lucio, and the father of her children, Jerry Purcell. She is survived... View Obituary & Service Information

The family of Naomi Ruth Grandy created this Life Tributes page to make it easy to share your memories.

Send flowers to the Grandy family.