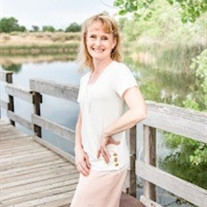 Shelly was ushered into the presence of her precious Savior on Sunday December 5th after a lengthy battle with cancer. She fought a good fight and finished her course with grace. Born in Colorado Springs to Larry and Sharon Hood on October 24, 1971. She has one sister Becki. The family moved from Colorado Springs to Fort Collins in 1972. Her parents owned Triple H Drywall, and she grew up in the construction industry. She attended Faith Baptist School in Longmont, CO and graduated in 1990. After high school, she attended Bob Jones University in Greenville, SC with a major in Elementary Education and a minor in Home Economics. She graduated with her BS in 1994. She met the love of her life, Jim Kruse, on a blind date in 1991. At this lunch they discussed their mutual love of pizza, Pepsi, M & M’s, and football. They were married December 31, 1993, at Front Range Baptist Church. Upon graduating from Bob Jones, Shelly became the kindergarten teacher at Front Range Baptist Academy until 1999. While Kindergarten was not her desired age group, she soon found her passion and love for this age. She excelled in teaching fundamentals of reading, writing and arithmetic. Her final kindergarten graduation occurred in early May and on June 10th, Jim and Shelly welcomed their first daughter, Emily. In April 2001, they welcomed Allison, and in March 2003 they welcomed Angela. She focused her attention on raising and training her daughters. She loved cooking and creating with them. They formed an inseparable bond and she molded them to be Godly young ladies. While balancing the duties of wife and mom, she started playing the piano for church, choirs, and special music. She also offered private piano lessons to those who had a passion for music as Shelly did. When the girls started school, she became the piano player for all choirs and programs at Front Range Baptist Academy. Her dad said it best when he stated, “nobody could make that piano talk like Shelly could”. She loved music and watching kids’ eyes lighten as they prepared and sang for programs. In 2013, she and Jim started Copper Spring Solutions, a company that specializes in steel stud framing, drywall, and acoustic treatments. She is preceded in death by two angel babies, both sets of grandparents, Don and Lucille Hood (Ft Collins), and Norris and Norma Drovdal (Gillette, WY), and one aunt, Ardith Hood (Pacific City, OR). She is survived by her adoring husband, Jim, all three daughters, Emily and her fiancé Brenden, Allison, and Angela, her parents, Larry and Sharon Hood (Ft. Collins), Becki (Tommy) Burke of Cheyenne, numerous uncles, aunts and cousins. She was passionate about four things. She loved her God with all her heart and desired those around her would know and love the same God. She loved her husband and daughters with all her heart and devoted her entire life to them. She loved good music. She loved Christmas and everything about the holiday season. She will be greatly missed. Visitation will be held 4 - 7 pm, Thursday, December 9, 2021 at Bohlender Funeral Chapel. The funeral service will be held 1 pm, Friday, December 10, 2021 at Front Range Baptist Church, 225 E. Harmony Rd. A private interment will be held at Roselawn Cemetery.

Shelly was ushered into the presence of her precious Savior on Sunday December 5th after a lengthy battle with cancer. She fought a good fight and finished her course with grace. Born in Colorado Springs to Larry and Sharon Hood on October... View Obituary & Service Information

The family of Michelle Ann Kruse created this Life Tributes page to make it easy to share your memories.

Shelly was ushered into the presence of her precious Savior on...

Send flowers to the Kruse family.