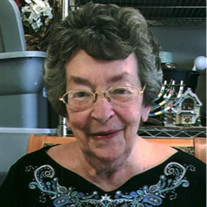 Madeline Duffy came into this world to devoted parents Charles Cecil Duffy and Aileen Priscilla Spalding Duffy. Despite a humble beginning during the Great Depression, Madeline enjoyed her upbringing with her older sister, Gladys Joanne. This closeness continued throughout Madeline’s lifetime. Her younger brothers, Charles Larry (1936) and Robert Lee (1945), completed the family from Oak Park, Michigan. Madeline graduated from Lincoln High School of Ferndale, Michigan in 1952 where she concentrated on a curriculum of business administration.These studies flourished and remained a large part of her life while employed. Following a brief employment in Highland Park , Michigan, Madeline moved and started a lifelong career with Safeway Stores Headquarters in Oakland, CA, where she went from clerical work to executive secretary over a span of 30 years. Madeline volunteered numerous hours to charities, was an officer of a professional sorority and kept a company sponsored bowling team on track. That occasional score in the mid two hundreds was heard about for weeks to come. Madeline was always known as the “Perfectionist” at work and this trait carried over into her personal life. Everything in it’s place within an inch or in a file…even down to the cutlery drawer where every fork, knife and spoon were in perfect order. Madeline worked for several executives at Safeway and eventually became the secretary to George Vincent, Vice-President of Pre-Pakt Produce. Yes, she married the boss and together they traveled extensively both domestically and abroad, picking London, England as her favorite destination. Madeline promptly became the gourmet cook as George entertained business executives from around the world interested in how Safeway conducted business. This style of cooking and presentation carried through as she became the hostess of many family holiday dinners. Together, George and Madeline built their dream retirement log home in northern California, which unfortunately was destroyed by fire. Just prior to retirement George passed away from cancer. The retirement party that Safeway had planned for George became a memorial service. Tragically, Madeline’s dad suffered a massive heart attack and died while attending the memorial service for George. Devastated by the loss of her two favorite men in her life, Madeline returned to Michigan to care for her mother who was suffering from cancer. After her mother’s death a year later, Madeline returned to California and continued her career with Safeway. Madeline worked with Ancil Scull, Safeway’s International Manager, and they eventually married but this marriage ended in divorce. Following her retirement from Safeway in 1995, Madeline relocated to Colorado to be close to her brothers Larry and Bob. Madeline was an accomplished fisher-woman, ardent reader, talented” at arts and crafts and a painter. She would utilize pine cones, stones or other items found in nature to personally create craft items she shared with family members or donated to hospital patients and charities. If anyone ever had a need, Madeline was right there to fulfill it. She was also a master gardener, lover of Willie Nelson’s and Yanni’s music, maple bars with Don Francisco Hazelnut coffee for breakfast, and CSI on TV. She loved her faithful companion pets, Coco, Murphy and Sweetie, and cat, Noway who showed up one morning at her back door skinny and whinny. Madeline said, “No way are you coming in my home!”. Following a diagnosis of onset dementia, Madeline moved to Brookdale Assisted Living Center where she taught arts and crafts to the residents, and was also designated as an Ambassador, introducing potential clients to the facility. Madeline was preceded in death by her husband George, her parents, and her brother Bob. She is survived by her sister Joanne Ewers of Royal Oak, MI, brother Larry (Paulina) Duffy of St. George, UT , cousin Jim (Anne) Duffy of Ontario, Canada and a number of nieces, nephews and in-laws. Her ashes were scattered in the Pacific Ocean as she had requested. Madeline will be remembered as the “Talented Perfectionist” and “Ever the Hostess”

Madeline Duffy came into this world to devoted parents Charles Cecil Duffy and Aileen Priscilla Spalding Duffy. Despite a humble beginning during the Great Depression, Madeline enjoyed her upbringing with her older sister, Gladys Joanne. This... View Obituary & Service Information

The family of Madeline Vincent Scull created this Life Tributes page to make it easy to share your memories.

Madeline Duffy came into this world to devoted parents Charles...

Send flowers to the Scull family.