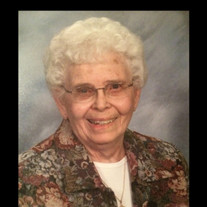 Arlene Short Passed on 8 January 2021 in Fort Collins, Colorado. Lucille Arlene Simianer Short was born 9 November 1925 in Fort Collins, CO to Maude Elizabeth Thompson and Francis Carl Simianer. She was raised on a dairy farm on North College Ave. Arlene attended Franklin Elementary School, Lincoln Jr. High and graduated from Fort Collins High School in 1943. After graduation as many of her classmates, she moved to San Diego and worked for Consolidated Aircraft in support of the WWII effort. Arlene married Howard E. Anderson and during WWII she moved to several Navy bases with her husband where she gained valuable experience working with the public. After the war, the couple returned to Fort Collins. Arlene worked for the Larimer County Assessors Office until 1950 when she and her husband returned to San Diego. Arlene worked for Sears, Roebuck and Company until the birth of their daughter Susan in 1953. Arlene returned to Fort Collins in 1958 after her divorce and she went to work for Woodward Governor. In June 1960 she married Dwight L. Short. She went to work for the State of Colorado serving at the State Capital, Colorado State University, and Colorado School of Mines. Retiring in 1983 she and her husband Dwight traveled the United States in their 5th wheel. In 1989, they returned to Fort Collins. Arlene was a member and volunteer of the First United Methodist Church for several years. She recently began attending the Buckhorn Presbyterian Church zoom services. She also served as the co chairman for the Fort Collins High School Class of 1943 reunion committee. Arlene was a member of the Daughters of the American Revolution and an organizing member of the Overland Trail Chapter of the NSDAR in LaPorte serving as their first Membership Chairman. She was a life member of the American Rosie the Riveter Association. Her greatest joy was her family. Arlene was predeceased in death by her parents, her husband, and her brother Donald Gene Simianer. She is survived by her daughter Susan Anderson Harmon of Fort Collins, CO, two grandsons, James M. Harmon, Lt Col, USAF, and wife Belva, and Michael A. Harmon Lt Col, USAF (ret) and wife Jessica, and six great grandchildren; Luke, Logan, Kaden, Aurora, Gabriel, and Josie. In lieu of flowers, donations can be made to the Glaucoma Foundation and Pathway Hospice in Fort Collins through Bohlender Funeral Chapel.

The family of Lucille Arlene Short created this Life Tributes page to make it easy to share your memories.

Send flowers to the Short family.