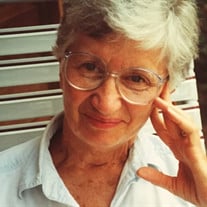 Lucille Norma Anderson of Ft. Collins, 100 years old and forever young at heart, passed away on April 19, 2021. She had recently celebrated her 100th birthday with her family and her caregivers using 100 balloons! She was born in Milwaukee WI to Clara Zernia Jelinek and Walter John Jelinek. After graduating from Washington High School in Milwaukee in 1938, she attended Wisconsin University there. On January 22, 1949, she married the late Dale A. Anderson, a tall dark and handsome Nebraska farmer. They were introduced by a mutual friend in Milwaukee and it was love at first sight. They celebrated their 61st wedding anniversary before his passing. After they moved their family of 4 children to Ft. Collins in 1957, Lucille really enjoyed camping, hiking, fishing and backpacking in the beautiful Colorado Rockies. She and Dale shared their love for going to the mountains and for doing outdoor activities with their children and grandchildren. They also loved traveling and dancing...polka dancing, ballroom dancing and square dancing. Her other favorite activities were reading and flower gardening. She earned her BA with Distinction from Colorado State University in 1962 with an English and Secondary Teaching major. In 1972 she obtained her MA in Media from the University of Northern Colorado. She worked as the secretary in the CSU History Department and for 10 years taught English and Journalism at Fort Collins High School where her students fondly called her "Mrs. A". After she completed her Master's degree in Media, she worked for 10 years as the Media Specialist at Wellington Junior High School. Both she and Dale retired in 1982. She had a zest for life and lived her long life to the fullest. She loved outdoor adventures including bicycling with American Youth Hostels (AYH) throughout Wisconsin in her 20's. She may have also done bike trips in other states. Lucille was a strong and independent woman who was well ahead of her time. She even led an AYH bike trip in Mexico. Many of her AYH friends became lifelong friends. In her 40's, she took an adventurous multi-day whitewater rafting trip on the Colorado River through the entire Grand Canyon learning about its geology from the professor on board teaching a class to the participants. Lucille had a beautiful smile, a sharp wit and a great sense of humor. She was fun loving, gregarious, free-spirited, inspiring and amazing. We want to extend our deep appreciation for the wonderful care our mother received from the warm and caring "Green House Homes" staff while she lived there. As well as from some other previous caregivers. She is survived by her children: Dara Anderson (Bob Essin) of Ft. Collins and Vail CO; Trent Anderson (Darlene Chovan-Anderson) of Spokane WA; Ren Anderson (Pepper Schedin) of Portland OR; and Sonja Anderson of Ft. Collins. Her grandchildren: Natasha (Yaro) Livits; Garrett (Kim Skaggs), Justin (Alex Davis) and Weston Anderson; and Trevor and Bergan Anderson. Her great-grandsons: Ari and Benji Livits. She also is survived by her brother-in-law Bill Fechtmeyer and many neices and nephews. She was preceded in death by her parents, her husband, sisters Shirley Jones (the late Ray) and Beverly Fechtmeyer (Bill) and her brother Clyde (the late Marlys) Jelinek. Lucille's Celebration of Life is postponed until summer. In lieu of flowers, memorial donations may be made to the Food Bank for Larimer County or a charity of your choice in Lucille's name. Visit bohlenderfuneralchapel.com to share memories or condolences for the family.

Lucille Norma Anderson of Ft. Collins, 100 years old and forever young at heart, passed away on April 19, 2021. She had recently celebrated her 100th birthday with her family and her caregivers using 100 balloons! She was born in Milwaukee... View Obituary & Service Information

The family of Lucille Norma Anderson created this Life Tributes page to make it easy to share your memories.

Send flowers to the Anderson family.