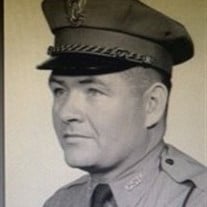 Louis Franco was born on a farm East of Lamar, Colorado to Alvaro and Catalina (Melgosa) Franco on June 21, 1933. He departed this life to be with his Lord on January 13, 2021 in Fort Collins, Colorado. He grew up on a farm West of Lamar, Colorado, went to a little country school where he was a student under Mrs. Mabel Grove who taught him for all eight elementary grades. He then went to Lamar Union High School in Lamar, Colorado, where he graduated in 1952. Louis enlisted in the U.S. Army, did his basic training in Fort Ord in California, and then served the remainder of his service years in Germany. Louis farmed West of Lamar for three years and then became interested in law enforcement. He applied for the Colorado State Troopers and took his training in Golden, Colorado. He was assigned to the Larimer County area in and around Fort Collins, Colorado, where he remained until his retirement. He then took up his hobby as a part time mechanic until his death. Louis was preceded in death by his wife Cleopatra, his parents, and his brothers; Ben, Andrew, Silvey, and David. He is survived by his daughters; Verna Herrera (son Jaylon Griner and great grandkids Jaylon Jr. and Jaida), Cathy Franco, Deanna Whiteaker (husband Scott and son Blake) and foster daughter Janet K. Howard. Louis is also survived by his brother Daniel Franco (Sandy), sisters; Nina Velasquez (Ray), Romana Arithson (Rodger), Carmen Melgosa (Dan), Berna Pipkin, Theresa Sondburg (Bryan), and a host of nieces, nephews, cousins, other relatives and friends, especially his dear friend Elizabeth Ford who has been Louis and Cleopatra's friend for over 55 years. A private service will be held at Bohlender Funeral Chapel. Friends may view the live stream at bohlenderfuneralchapel.com on Tuesday, January 19, 2021, from 10-11 am. An internment will take place at Resthaven Memory Gardens Cemetery on Tuesday, January 19, 2021, at 11:30 am.

The family of Louis Franco created this Life Tributes page to make it easy to share your memories.

Louis Franco was born on a farm East of Lamar, Colorado to Alvaro...

Send flowers to the Franco family.