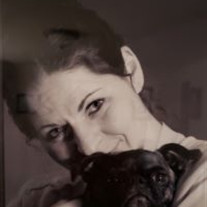 Lisa Gwen Zetmeir was born March 21, 1979 to Gwyn and Averil Strand. The doctor called her a premium baby because her parents had been married 11 years before she was born. They were truly surprised when her due date was on her parent’s birthday – they were both born on March 27. She, however had a mind of her own and came 6 days earlier than predicted. Her younger sister, Marci LeeAnne, was born 17 months later to complete the family. Joe and Annabelle Leo were her adopted grandparents and a major part of her life. None of us thought she would leave this world before Annabelle who is now 102 years old. Lisa was smart, organized and responsible. Her sister Marci said she had “dead baby” syndrome because Lisa always left her room in perfect order with the bed made and everything put in its place. She somehow always knew that academic achievement was very important and never failed to do her homework without prompting. Lisa played basketball in Junior high and was on the only non-all-star team picked to go to the Nationals. Unfortunately, a week before nationals she lost her ACL and was unable to go. Because she was still growing, she could not have her knee repaired right away and that stopped her basketball career. She had always said she was going to get an athletic scholarship, but with this setback, she just said: “That’s all right, I’ll just get an academic scholarship” and she did. As a teenager she had a thoroughbred mare, named Billy and later two fouls from Billy. She rode hunter jumpers and performed in early competitions. She worked at the stable to support her horse’s boarding. She graduated from Poudre High School’s first International Baccalaureate program and attended CSU where she received a Bachelor of Science degree with a major in Biochemistry. She moved to St. Joseph, MO where she worked for Sigma Aldrich as a Chromatography Specialist and was responsible for sales in a 6-state region. Unfortunately, in her late twenties, she had to leave that job because she became disabled with MS. She moved back to Fort Collins to be close to family. She married Jason Zetmeir (the love her life) August 16, 2019. They had their furry babies who were a great joy to them both. They had a remarkable life together with her managing the business aspects of the household and Jason helping her where her wheelchair would not allow her to go. She loved flowers and he made the yard beautiful by planting her favorites. They also planted and grew a large quantity of great vegetables in a very small space. Their life together was tragically cut short on April 3, 2020. After a series of life saving attempted surgeries, she lost her long-fought battle, leaving her family devastated with her loss. Lisa’s smile would light up the room when you were with her. People were drawn to her positivity and could see the wonderful daughter, wife and young woman she was. Lisa and Jason loved to have family celebrations and she always tried to be the best hostess possible. Lisa always wanted everyone to just smile, laugh, have a good time, and to enjoy life and each other’s company. She lost a great deal of the life she had loved when she became disabled, but always took a positive, can-do approach. She never gave up trying to be the best she could be. The family all miss the ray of sunshine she brought into our world.

Lisa Gwen Zetmeir was born March 21, 1979 to Gwyn and Averil Strand. The doctor called her a premium baby because her parents had been married 11 years before she was born. They were truly surprised when her due date was on her parent&#8217;s... View Obituary & Service Information

The family of Lisa Gwen Zetmeir created this Life Tributes page to make it easy to share your memories.

Send flowers to the Zetmeir family.