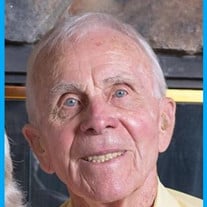 Les Allison passed away peacefully at his Fort Collins home, surrounded by his family, on Thursday, June 27, 2019. He was born to Edward and Estella Dow Allison on April 3, 1927 in Waukesha, Wisconsin and later moved with his family to Waterloo, IA. He spent part of his childhood on a ranch with his great Uncle Joe and Aunt Ade Allison Wingfield near Vernon, CO and he cherished this family throughout his life. He met his future wife, Clarissa Vogt, in 1945 in Waterloo during his Christmas leave from the service and they were later married on February 5, 1948. When Les was a teenager, he stayed with his cousin, Virginia (Bernard) Farrell, and worked on the Shadow Mountain Dam near Grand Lake, CO. He served in the Army after WW2 ended, running a snack bar for troops at Dachau, Germany during the time of the Nuremberg trials. After his service, Les returned to Waterloo where he married and started his family. He moved to Fort Collins, CO in 1952 and was a General Contractor for many years building custom homes and apartments. He enjoyed going to Las Vegas and traveling across the U.S., Canada, Mexico and Europe with his family. After retirement, he and Clarissa spent winters at their home in Mesa, AZ and summers in Fort Collins. Family was important and they often visited relatives, they faithfully attended the Allison, Wingfield and Vogt family reunions and they spent many hours documenting family histories. Les was a devoted husband and father and instilled his dedication to hard work into his children. He is survived by his loving wife of 71 years, Clarissa, and his children: Chris (Barb) Allison of Fort Collins, CO; Val (J.) Moody of Windsor, CO; Annette (Tom) Leazer of Windsor, CO; and Rich (Angelica) Allison of Fort Collins, CO. His grandchildren: Michael (Sarah) Allison, Jacquelyn and Halei Moody; step-grandchildren: John Moody, Yendri Traugutt, and Amiey Janezich and great grandchildren: Marcus and Avery Allison. He is also survived by his brother, William (Arlene) Allison of Davenport, IA. He is preceded in death by four siblings, his daughter Leslee Allison, his granddaughter Chrissa Allison, and his step-granddaughter Kari Moody Austin. We will celebrate Les Allison’s life with a memorial Mass on July 12, 2019 at 9:30 a.m. at St. Joseph Catholic Church followed by a lunch reception at 11:00 in the church hall. In lieu of flowers, please send donations in Les’ memory to Foothills Gateway in Fort Collins or your favorite charity.

Les Allison passed away peacefully at his Fort Collins home, surrounded by his family, on Thursday, June 27, 2019. He was born to Edward and Estella Dow Allison on April 3, 1927 in Waukesha, Wisconsin and later moved with his family to Waterloo,... View Obituary & Service Information

The family of Leslie Richard Allison created this Life Tributes page to make it easy to share your memories.

Les Allison passed away peacefully at his Fort Collins home,...

Send flowers to the Allison family.