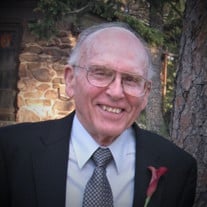 Lawrence Eldon Kendall passed away peacefully on Father’s Day, June 20, 2021, in Fort Collins, Colorado. Lawrence (Larry) was born June 25, 1929, on a farm in Grant County, Indiana to parents Walter & Mabel (Foster) Kendall. He was the oldest of four brothers, followed by Harvey Laverne Kendall, Victor Herman Kendall, (Rowena), and Joseph Karl Kendall (Pam). Upon graduating from Sweetser High School in 1946, Larry enrolled in Purdue University and earned a bachelor’s degree in Agriculture in 1950. After college he enlisted in the United States Air Force and served from 1951 to 1955. During this time, he married Janice Dale Burns on June 15, 1952, which means they had just celebrated 69 years of marriage. Three children were added to the young family; twin daughters LeRaye Gwynn and René Lynn in 1956, followed by a son, Gregory Dean, in 1957. Following his military service, Larry enrolled in Seminary at Anderson School of Theology in Anderson, Indiana, where he earned the Master of Divinity degree, and went on to pastor two congregations of the Church of God in LaJunta, Colorado, and Danville, Illinois. Larry finished his working years as an appliance service technician at Pennington Appliance in Marion, Indiana. In retirement, Larry and Janice enjoyed some travelling, including trips to Germany, Ireland, Hawaii, Alaska, Switzerland, and a New England Fall Foliage tour, as well as their annual trek to the Church of God retreat at the Cove in North Carolina. Throughout his life, Larry enjoyed music, especially singing, dating back to his time in the Purdue Glee Club. Uncountable solos, duets, quartets, and choirs filled his years in the church. But he is perhaps best remembered for the classics “Sweet Little Jesus Boy” at Christmas, and “Open the Gates of the Temple” at Easter. He was also an avid reader, enjoying a wide range of topics from history and theology to biography and novels. Larry was a fitness buff. He started “jogging” long before it became popular. In his later years he switched to walking and continued to rack up several miles a day. And he never missed his early morning yoga stretches. Larry was a man of deep faith who loved God and loved people. He was kind and gentle, quiet but never shy, and greeted everyone with a quick and genuine smile. Larry was preceded in death by his parents, Walter & Mabel Kendall; two brothers, Harvey Laverne Kendall, and Victor Herman Kendall; and a granddaughter, Keelia René Main. He is survived by his wife, Janice; three children and their spouses, LeRaye & Mark Cameron, René & Dan Main, and Greg & Becky Kendall; four grandchildren, Keah Redder (Steve), Tyler Kendall (Jessie), Trevor Main (Hannah), and Chelsea Kendall; and five great-grandchildren, Lydia Redder, Macy Redder, Henry Redder, Tabitha Main and Hosea Main. Larry will be dearly missed by all of these and many more extended family and friends.

The family of Lawrence E. Kendall created this Life Tributes page to make it easy to share your memories.