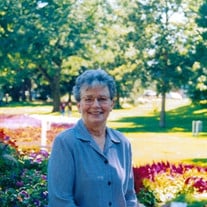 Kathleen Mae McKay “Kate”, 90, went home to her Lord and Savior on August 13, 2019. She passed away peacefully in Fort Collins with her adoring family at her side. Kate was welcomed into the world on December 22, 1928 by Martha “Mike” (Dwiggins) and Oakey Adkins in Columbus, Ohio. Kate was one of four girls: Jerrie (Morse), Kate, JoAnn (Adsit Fowler) and Jackie (Corklin). The family of six resided in Columbus until 1943 when her father’s job with Union Pacific Railroad relocated them to Denver. They only resided here for one short year and during this time Kate attended West High School, where she had memories of riding the local street cars to and from school. Another job relocation took the family to Cheyenne, Wyoming where Kate transferred to Cheyenne High School. Throughout high school, Kate worked at the local movie theatre as a cashier. She could fondly recall ticket prices being $0.75 for adults and $0.25 for children. After graduating high school in 1947, Kate worked as a secretary for a law firm. It was also during this year that she incidentally met her future husband, George, while dancing at Cheyenne Frontier Days. This was the beginning of a 27-year relationship. Kate married George Edward McKay on October 15, 1949 in Cheyenne, Wyoming. They began a family in 1951 with the addition of their first daughter, Debbie (Hardy). Their second daughter, Lynda (Hall) was not short to follow in 1953. It was also in this year that Kate, George and the two daughters packed up and moved to Grover, Colorado to begin their new adventure on a ranch. Here they would spend thirteen memorable years, adding to the family Jackie (Moore) in 1957, Kathy (Nichols) in 1955 and Patti (Leidholt) in 1960. The family of seven had numerous crops, horses, milk cows and raised and sold Hereford cattle. Kate was very busy during these years, as she cooked every meal for her family as well as the hired hands, assisted in the ranching and was always present for her five daughters school events and 4-H meetings. She was also a proud member of the Order of the Eastern Star, Grand Chapter of Wyoming. The summer of 1966 brought change to the family, as they decided to sell the ranch and move to Fort Collins, Colorado. Having lived in a city before, Kate adjusted well and found a job in accounts payable at Poudre Valley Hospital. She would spend a dedicated 33 years working for this organization; making wonderful memories and friendships that lasted her lifetime. She was an integral part of the hospital bowling league, which she treasured many “200 bowling pin” pins. Kate also fell into some very difficult hardships during this era of her life, but she always fought to come out on top. She prided herself upon the fact that she rebuilt a broken household and saw that all her daughters graduated from high school. After many years of hard work, Kate was able to purchase and build her own home at the age of 58. It was in this home that she helped raise nine grandchildren and held all holiday gatherings. This was a truly wonderful time for many. In 2003 at the age of 75, Kate received news of her diagnosis with lymphoma. She hit the battlefield immediately with no other plans than to beat the disease…and she was right! While she successfully treated her cancer, she also made the tough decision to retire from her position at the hospital. They couldn’t keep her gone long, as she quickly returned to volunteer for nine years, giving more than 1200 hours of her time! Kate lived in Loveland, Colorado for many years until finally residing in Fort Collins. When it was asked of Kate what she would like most to be remembered for, she stated “That I worked my ass off”! Kate’s greatest accomplishment in life was the large family she created. Kate is survived by her sisters, JoAnn (the late Ed) Adsit Fowler, Jackie (the late Jim) Corklin, her five daughters Debbie (Brent) Hardy, Lynda (Monk) Hall, Jackie (Eric) Moore, Kathy Nichols, Patti (Larry Little) Leidholt, her nine grandchildren Tracy (Scott) Edgar, Gary (Havie) Hall, Bree (Paul) Moth, Jamie (Michael) Thompson, Jenna (Jeffrey) Thompson, Steve Nichols, Kendra (Dale) Rellas, John Leidholt, Tanner Leidholt, thirteen great-grandchildren and one great-great-grandchild. Funeral services will be held at 3:00pm Tuesday, August 20 at Bohlender Funeral Chapel in Fort Collins, Colorado. We kindly ask that in leu of flowers, you would consider donating to one of Kate’s most treasured organizations: Larimer Humane Society, St. Jude Children’s Research Hospital or Pathways Hospice. • Pathways Hospice Fort Collins: https://interland3.donorperfect.net/weblink/weblink.aspx?name=pathhosp&id=1 • Larimer Humane Society: http://www.larimerhumane.org/love/memorialstributes • St. Jude Children’s Research Hospital: http://giftfunds.stjude.org/kathleenmckay

The family of Kathleen "Kate" Mae McKay created this Life Tributes page to make it easy to share your memories.

Send flowers to the McKay family.