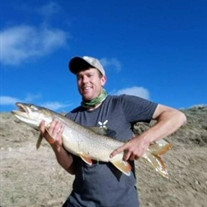 Justin Robert Jones, age 38, passed away unexpectedly on September 28, 2021. A true Fort Collins native, Justin was born at Poudre Valley Hospital on November 15, 1982 and grew up in Fort Collins. He attended Rocky Mountain High School and worked in the area as a laborer. Justin, a tender soul who didn't have a mean bone in his body, was always happiest making other people laugh. He loved spending time at Horsetooth, especially with a fishing pole in his hand, enjoyed a good game of poker and cheering on the Denver Broncos. Justin adored Bella, his pit bull, who was the love of his life. Justin is survived by his mother S. Michelle Jones, sister Natashia Lynn Jones, brother Jason Michael Jones, nephew Nathan Jones, and Bella, his pit bull, all of Fort Collins; his grandparents Ken and Shirley Kissell of Cheyenne, Wyoming and numerous aunts, uncles, cousins, and friends. He was preceded in death by his father Tod Lee Jones and grandparents Tom and Terry Jones. Justin was a son, brother, grandson, uncle, nephew, cousin, and friend to many and was loved by all. His passing has left a huge hole in our hearts. He will be missed. A Memorial service will be held on Monday, October 11, 2021 at 1pm at Bohlender Funeral Chapel in Fort Collins, CO. A private family graveside service will take place at a later date.

The family of Justin Robert Jones created this Life Tributes page to make it easy to share your memories.

Send flowers to the Jones family.