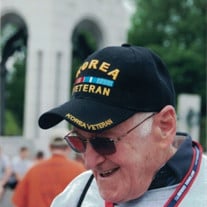 Joseph Leo Armond Patrick Robichaud, known as Leo, was born on March 5th, 1929 in Fitchburg, Massachusetts, and passed away March 24th, 2020 in Fort Collins, CO. His father was Edward Clovis Robichaud, mother Lillian Arsonault Robichaud. Leo was number seven of nine children. He attended St. Joseph Elementary School and graduated from Fitchburg High School in 1948. He enlisted in the Air Force and served during the Korean war from 1948 to 1952. During that time he was stationed in: Louisiana; England; Barrow, Alaska; Guam; and Africa. He worked as a parachute rigger teaching natives in Guam how to sew silk parachutes. He was also a waist gunner and medaled as a sharpshooter. He was discharged as a Staff sergeant. Leo then attended Worcester Trade School and became a machinist. He married, and had a daughter Laura, and moved to Florida, later divorcing. He served as a Senior Deacon at St. Gregory's Episcopal Church in Boca Raton, FL and became a Boy Scout Leader. Leo married Barbara Staul in 1972 and had a son Michael Bentley in 1975. He became a member of the Masonic Lodge in Deerfield Beach, FL in 1974. After serving in several offices, he rose to Master of his lodge and became a 32nd degree Mason, fundraising for the handicapped, widows, and orphans. At this point he was working in construction building designer homes and hotels, and also serving as a local union representative. In 1977 the family moved to Bellvue, Colorado where Leo found work at Woodward Governor as a machinist. He retired in 1979 and started driving a school bus in the mountains for Stove Prairie School for the next 13 years. After his second retirement, he engaged in environmental projects and building handicapped access to parks across Colorado and Wyoming with the Telephone Pioneers of America. Leo enjoyed playing golf, following politics, and current events. He also enjoyed sports and working on puzzles and crosswords. He was an avid history buff, a student of WWII, and the Bible. He started working cross stitch as a hobby and won several ribbons at the Larimer County Fair for his work. He loved music and would always be listening to something while woodworking, building bird feeders, and was always whistling a tune. Leo is survived by his wife Barbara, son Michael and daughter-in-law Shannon, all residing in Fort Collins, CO. His daughter Laura Slavins and her family reside in Dothan, AL. Leo had a wonderful smile and sense of humor, and will be terribly missed. A memorial website for Leo has been setup to showcase pictures of his life. LeoRobichaud.com

The family of Joseph Leo Robichaud created this Life Tributes page to make it easy to share your memories.

Send flowers to the Robichaud family.