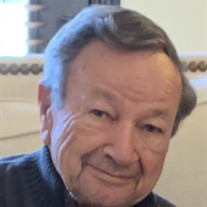 Col. Joseph E. Graham, May 28, 1931 – June 3, 2021 Joe was a beloved husband, father, grandfather, uncle, friend and devout Catholic. He passed away surrounded by his four devoted daughters at age 90. He was born in Rochester, New York to Joseph L. Graham and Dorothy M. Kane. Joe had two brothers, Edward and Richard and two sisters, Margaret and Dorothy. Joe graduated from the Aquinas Institute of Rochester where he played football and boxed in the Mission Bouts. While in high school, he met the love of his life, Ruth Yeoman. They married in 1954 and spent 36 blessed years together before Ruth passed away. Joe and Ruth had five children; Sheryl, Patrick, Susan, Sheila and Sandra. After High School, Joe went to St. Bonaventure University where he played football and was commissioned through the Army ROTC. He graduated with a degree in Business Administration and later earned an MBA from Syracuse University. During Joe’s career in the U.S. Army, he served with the 82nd and 101st Airborne, was a Vietnam Veteran, had two tours at the Pentagon, commanded a Field Artillery Battalion at Fort Sill and numerous other assignments. After Ruth’s death, Joe found love again and married Dee Vadas. Dee had 5 grown children that Joe treated as his own; Susie, David, Keith, Greg and Leslie. They were married 27 years until Dee’s death in 2018. One of Joe’s greatest sorrows was to lose his son Patrick in an accident when Patrick was 51. To the family’s joy, Pat’s wife Marjie has remained a member of our family. He is survived by his brother, Richard, daughters Sherry (Dave), Sue (Mike), Sheila (Dave) and Sandra (Mike), Dee’s children Susie (Mike), David (Joan), Keith, Greg (Cheryl), Leslie (Bob), and numerous grandchildren and great grandchildren. Joe loved to play golf, football, and he was an avid skier. Joe supported many children’s charities. He will be greatly missed. A Memorial Mass will be held on Friday, July 23, 2021, 10:00am, at St. Rita Roman Catholic Church, 1008 Maple Dr., Webster, NY 14580. Joe will be laid to rest in Arlington National Cemetery.

Col. Joseph E. Graham, May 28, 1931 &#8211; June 3, 2021 Joe was a beloved husband, father, grandfather, uncle, friend and devout Catholic. He passed away surrounded by his four devoted daughters at age 90. He was born in Rochester, New... View Obituary & Service Information

The family of Joseph Edward Graham created this Life Tributes page to make it easy to share your memories.

Send flowers to the Graham family.