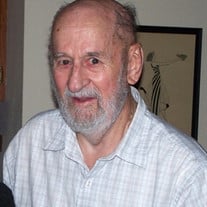 After a 23 year battle with cancer, John Danial Marwitz, 82, with family by his side, passed peacefully at his home in Fort Collins, CO on November 23, 2019. John was born in Brownwood, TX on March 6, 1937 to Adolf Otto Marwitz and Mary Ann (Prescher) Marwitz. When he was 10 years old, John's family moved to a small farm outside of Fort Morgan, CO. John graduated from Fort Morgan High School in 1955 and then attended CSU, earning a BS degree in Civil Engineering and a MS degree in Hydraulic Engineering. At CSU, he met Karen, his beloved wife, and they married in the summer of 1959. As an undergrad, John was in Advanced ROTC and upon graduating, had a 3 year obligation with the USAF. One year was spent in Seattle at the University of Washington becoming a weather forecaster. The last two years were spent at Bunker Hill AFB in Indiana where he gave weather briefings to the bomber alert crews during the Berlin Crisis. In 1965, while again at CSU, John was involved with a hail suppression research project in north eastern CO. It was then that he decided that weather research was his passion. In 1967, John became a professor of Atmospheric Science at the UW at Laramie and soon after earned his PhD in Meteorology from McGill University in Montreal Canada. During his 33 year career at UW, he influenced the lives and careers of many graduate students, who are spread out across the globe. Additionally, he did research on many aspects of weather using a highly instrumented airplane. John traveled the world. From his research, John authored numerous scientific journal articles and publications, always hoping to advance science. John wanted to give credit to his fellow researchers at UW, who he described as "an amazing team." Upon retiring from UW in 1999, John and Karen moved to Fort Collins CO. John loved vegetable gardening, sailing, traveling, and the German card game 'Skat'. John loved learning. John loved his family. John loved God. He was a kind, good man. Born a humble farm boy, he always said he was a "lucky guy." John is survived by his caregiver and wife of 60 years, Karen (nee Squier), sons Curt (Carol), Scott (Mary Stella), Todd, Eric, daughter Kris, brother Melvin Marwitz, sisters Delora Ticnor and Mary Ann Taylor (Harry), 8 grandchildren, and 4 great-grandchildren. A family graveside burial service was held December 2, 2019 at Grandview Cemetery in Fort Collins. A memorial service will be held at the Lutheran Church of the Redeemer in Fort Morgan, CO on Saturday, December 14 at 11:30 a.m. In lieu of flowers, a memorial gift to Pathway Hospice in the care of Bohlender Funeral Chapel will be appreciated.

After a 23 year battle with cancer, John Danial Marwitz, 82, with family by his side, passed peacefully at his home in Fort Collins, CO on November 23, 2019. John was born in Brownwood, TX on March 6, 1937 to Adolf Otto Marwitz and Mary Ann... View Obituary & Service Information

The family of John D. Marwitz created this Life Tributes page to make it easy to share your memories.

Send flowers to the Marwitz family.