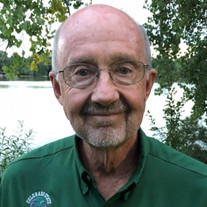 Dr. John H. Fitch, 78, of rural Fort Collins, CO passed away suddenly at his home on April 20, 2022. John was born March 1, 1944 in Medford, Oregon and was the son of Dr. Henry S. Fitch and Virginia R. Fitch. Although born in Oregon, he spent much of his childhood growing up on the University of Kansas Fitch Natural History Reservation near Lawrence, KS. Upon graduation from Lawrence High School, attended the University of Kansas, graduating in 1966 with a double major in anthropology and zoology. He was then hired for three years by the Smithsonian Institution to work on their Pacific Ocean Biological Survey Program. For this, he helped with the banding and tracking of pelagic sea birds over a large area encompassing the Central Pacific. He then attended Michigan State University where he received his M.S. and PhD degrees, finishing in 1975. He served as a faculty fellow and environmental science advisor in the Executive Office of the President during the Carter Administration. John also served as chief scientist of the Massachusetts Audubon Society, as president of The Conservancy of Southwest Florida, and as a founding faculty member of Florida Gulf Coast University. After moving to Fort Collins, CO, in retirement, John established a working relationship with Colorado State University. He was a nature enthusiast who loved the mountains west of town where he lived in a sustainable home of his own design. John is survived by his life partner, Gail Powell, a sister Alice Fitch Echelle, a brother Chet Fitch, and 2 daughters, Mary and Elizabeth. No memorial services are currently planned, but a private service will be held with family at a later date. The family of John would appreciate you taking the time to leave an online condolence, or even just type in your name, on the "Tribute Wall" (blue tab above this obituary), to let us know you visited this page. Thank you.

Dr. John H. Fitch, 78, of rural Fort Collins, CO passed away suddenly at his home on April 20, 2022. John was born March 1, 1944 in Medford, Oregon and was the son of Dr. Henry S. Fitch and Virginia R. Fitch. Although born in Oregon, he spent... View Obituary & Service Information

The family of John Henry Fitch created this Life Tributes page to make it easy to share your memories.

Send flowers to the Fitch family.