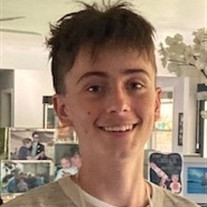 Our beloved son, John David Dokoupil went home to heaven on Sunday, January 30, 2022 after an 18 month battle with cancer. He was at home with his mom and dad by his side. John was born on May 3, 2006 to Andrew and Julie Dokoupil in Fort Collins, Colorado. He was the first born and only child for Andrew and Julie. John attended TR Paul Academy for preschool through 5th grade, Lincoln Middle School, and currently was a sophomore at Poudre High School. While attending TR Paul Academy he played the drums in the band, participating in several St Patrick’s Day, Veteran’s Day, and CSU Homecoming parades. He took fourth place in the school wide spelling bee in 5th grade and was awarded several character awards through the years. At Lincoln Middle School he played football and wrestled. He was a good, caring student who made an impression on his teachers. John was very shy when he was young. In around 3rd grade he learned that making people laugh was fun. He then began to be a class clown to the chagrin of some of his teachers. When his friends talk about John they would say he was funny and silly, making them laugh. When he was 2 years old his dad introduced him to the Star Wars movies. They quickly became his favorite. He began collecting and playing with Star Wars characters and lightsabers. When he would go out in public he had a pail of characters that would travel with him. His bedroom was decorated in Star Wars with a large Anakin figure on the wall. John had a passion for music. He continued with drum lessons learning to play a full set of drums by the time he was 7 years old. He loved to dress up and have dance parties, especially with his cousins, Linday and Nicole. While driving in the car he would ask if he could play music from his phone and then he would ask “Do you like this one?” He liked a lot of older songs and alternative rap. For many years he asked if he could have a cat. When his friend Dominic’s cat had kittens we finally gave in to getting a kitten. Along came Cowgirl. Her and John would play and fight like brother and sister. Cowgirl would even chase him in the yard like a dog. As John’s disease progressed and he spent his time reclined on the couch, Cowgirl could be found sleeping between his legs. She was there every day. John’s friends were a very important part of his life and he had many. He would frequently have 4 or 5 boys sleeping over in the basement or on his trampoline in the backyard, even sneaking out in the middle of the night at times. They would skateboard and play video games. He worked very hard at learning tricks on his skateboard. His friends were very loyal to him. He was very close with his grammy, April Manifold. She took care of John as a baby and young child 2 days per week until he was old enough to be at home alone after school. They had so many special times together doing art projects, baking, playing ball, deconstructing things, and just playing together. John loved to draw and was very good at it. He probably inherited this talent from his grammy as she was a talented artist. They had a very special bond. He loved traveling with his mom and dad to warm weather locations on the beach. His parents took him to several locations in Mexico, Paradise Island in the Bahamas, Maui, Hawaii, St. John’s and Clearwater, Florida. So many fun memories were made during these travels. Like riding in a golf cart around the island of Isla Mujeres and John almost getting bounced out when Andy hit a bump too hard. He also loved to go camping, paddleboarding, and hiking. He asked that when people ask about him they say “He was the favorite”. John is survived by his parents, his great aunt and uncle, Terry and Bob Weir, uncle and aunt, Mathew and Cathy Dokoupil, uncle Stephen Dokoupil and aunt and uncle, Rick and Susan Gould. Special cousins Nicole Dokoupil, and Lindsay and Keegan Pfeiffer. Special second cousins Bill Carter and Cathy Hazel, Rob and Rachel Korb, and third cousins Maddox and Madison Korb. He is also survived by many other cousins and great aunts and uncles. He was preceded in death by his paternal grandparents, Jan and Jean Dokoupil, his maternal grandparents, David and April Manifold and his uncle, David Manifold. A Celebration of John’s Life is being held at Peace With Christ Lutheran Church, 1412 W. Swallow Road, Fort Collins, CO 80521 at 2 p.m. Memorial contributions can be made in his name to Children’s Hospital in Denver or Pathways Hospice in Fort Collins.

Our beloved son, John David Dokoupil went home to heaven on Sunday, January 30, 2022 after an 18 month battle with cancer. He was at home with his mom and dad by his side. John was born on May 3, 2006 to Andrew and Julie Dokoupil in Fort... View Obituary & Service Information

The family of John David Dokoupil created this Life Tributes page to make it easy to share your memories.

Send flowers to the Dokoupil family.