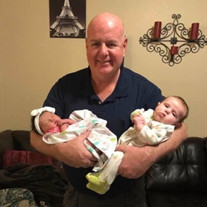 Joel Mark Cromley was born December 27, 1961 to Dale Wayne Cromley and Phyllis Jean Cromley (maiden name Avey) at St. Barnabas Hospital in Minneapolis, MN. He was the fourth child in their family of eight. Throughout his life Joel would site his father as his hero – shaping his spiritual life, work ethic, and firm commitment to his family. In his junior year in High School the family moved to Denver, Colorado. His high school years were filled with wrestling, football, and activity in the church. In 1980, Joel Graduated from Silver State Baptist School. He then went to Bob Jones for his early college education and later transferred Maranatha Bible College. The biblical education which he received in these institutions supplied him with a wealth of Biblical and pastoral knowledge with which he served the body of Christ throughout his life. It was while studying at Maranatha Bible College in the fall of 1983 that he met the love of his life Shelia Lucille Heflin. They dated for a year and were joined in holy matrimony in Pekin, Illinois on April 6, 1985. After marrying, Joel and Shelia moved to Fort Collins, Colorado. They were blessed to receive their first son Joshua Mark Cromley on January 21, 1988. One month later beginning his career working at Colorado State University as a custodian. Years of faithful service would see him rise through the ranks at CSU, finally retiring as the Supervisor of General Services and Heavy Equipment. Of all his many duties he derived the greatest joy from being the stadium manager at Hughes Stadium for 20 years. He always loved taking care of the stadium and overseeing the many different features of facilitating the football games at CSU. On February 13,1989, their family grew as they were blessed by the birth of their daughter Courtnie Ann Cromley. Throughout these years Joel enjoyed motorcycle riding, cooking, rooting for the Minnesota Vikings and spending time with his children. Joel’s life was above all characterized by an abiding love for Jesus Christ and service in the local church. Over the years he served as a deacon, elder, youth-pastor, bible-teacher, mentor, and pastor to untold multitudes in the Fort Collins area. As a skilled communicator of God’s word, and an embodiment of God’s grace and love, he always treasured the years that he got to spend in youth ministry. On October 18, 2018 Joel celebrated his retirement from 30 years of faithful service at Colorado State University and used his freedom of schedule to spend time with his two beloved granddaughters – Natalie Ann Platz (16-months old) and Jersey Sue-Lucille Cromley (14-months old), and actively teaching, making disciples, and being involved in the leadership team at Fort Collins Bible Church. March 30, 2020 marked the day in which Joel took his final breath due to complications in an upper-respiratory infection. He is survived by his wife Shelia Lucille Cromley, his son Joshua Mark Cromley, his daughter Courtnie Ann Cromley, his seven siblings (David, Rebecca, Beth, Martha, Steven, Thomas, and Timothy). Joel was loved by all, and will be missed. Service dates will be announced once the quarantine ends and will be held at Fort Collins Bible Church.

Joel Mark Cromley was born December 27, 1961 to Dale Wayne Cromley and Phyllis Jean Cromley (maiden name Avey) at St. Barnabas Hospital in Minneapolis, MN. He was the fourth child in their family of eight. Throughout his life Joel would site... View Obituary & Service Information

The family of Joel Mark Cromley created this Life Tributes page to make it easy to share your memories.

Send flowers to the Cromley family.