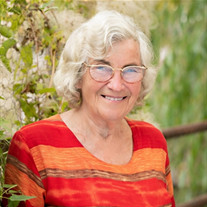 Joan Leonard Chadbourne 1935-2022 Joan Leonard Chadbourne died peacefully in her sleep of natural causes on the morning of Saturday, January 8, 2022, at the home of her daughter Dr. Marguerita Briana Cattell in Laporte, CO. She was born July 3, 1935, in Providence, R.I., the daughter of Joseph Humphrey Chadbourne and Barbara Anita Bullard. She grew up on a farm in Pudding Hill north of Hampton, CT. She became intimately acquainted with the Native American tribal nations springing a lifelong fascination with their arts and crafts, their spiritual teachings, their music and new world archeology. Joan loved life on the farm and for much of her life she kept a variety of animals and always found time for gardening, feeling a deep connection to Mother Earth. Nature was her muse and she enjoyed playing her recorder to wild animals. Joan loved canoeing with family and navigated lakes and rivers from Lake Champlain down to the Providence River. She enjoyed regular swimming and hiking trips with her children in the Green Mountains of Vermont often including swimming in the frigid river at the Huntington Gorge. She enjoyed camping under the starry skies and she was fascinated by ethnobotany and was able to sustain herself for days in the Rocky Mountains on foraged plants. She seemed to know an herb or tea for every affliction. Her sister, Nancy inspired a fascination in family genealogy and was editor of the “The Paul Chadbourn family of Waterborough, Maine, 1748-1990,” and the Chadbourne Family Newsletter, “The Pied Cow.” Stories abounded of the descendants of William Chadbourne, carpenter, of Kittery, ME., who came from Tamsworth, Staffordshire on the Pied Cow under contract from Capt. John Mason, Mar. 13, 1633/34 to build mills in Berwick, ME. She traced her descent from Mayflower passengers: Bradford, Hopkins, White, Brewster, Howland and Tilley as well as the mariners of Marblehead. She had a passion for children and education and taught at Percy Middle School and Hope High School in Providence, RI. She had a lifelong friendship with her students and their families and was always there for them day or night. Joan was an 11 out of 10 on the scale of openness and had the ability to approach complete strangers from any walk of life and immediately establish a bond. She met Swami Akhilananda when she was sixteen and was initiated by him into the Vedanta Society of Boston. After his passing she dedicated much of her life to the service of Swami Sarvagatananda and Tyagananda of Boston and Yogatamananda of Providence, and was later President of the Vedanta Society of Providence. Meditation was the foundation of every day and she enjoyed singing and chanting Vedanta songs and prayers and composed devotional poetry. She attended a boarding school in Pennsylvania before touring Europe with her uncle Hermann Dietrich Carus and aunt Emily Roxana (Chadbourne) Carus in 1951. The same year she attended her first year of high school in Towaco, New Jersey. She graduated La Salle-Peru Township High School in the class of 53. She attended Rockford University in 1954, where she was a member of the Cocks woman rowing and the basketball team and performed in several theatrical performances including the play Electra and the same year she was a madrigal singer at Illinois Valley Community College in Oglesby, IL. Here she met Luis F Pizzaro and had daughter Christina Pizzaro. She then married William Channing Cattell on Nov. 13, 1957, at the Cattell family home: 87 Highland St., West Newton, MA. They both attended Boston University while living at Auburndale. They had three daughters: Sivea, Gwyn and Marguerita Cattell all born Boston, MA. They divorced on Feb., 20, 1964. She was remarried in Hartford, CT., to naval aviator Lt. Col. Roland Henry Baker, Jr. on May 8, 1964 by Minister Nathaniel P. Lauriat of the Unitarian Society of Hartford at the Hartford Seminary, 77 Sherman, St, Hartford, CT and had a son, Roland Henry Baker, III, born at Westover Air Reserve Base in Chicopee, MA. She obtained a degree in Education on May 20, 1974 at The University of Vermont. She obtained a M.Ed from University of Colorado at Boulder, CO. She was preceded in death by her parents, her brother, Joseph Humphrey Chadbourne, and Joseph’s first wife Ann Kellogg (Hopkins) Nolan as well as her sister Nancy’s husband George Hamilton Maze and their son Robert Humphrey Maze and four aunts and uncles: Charlotte Francis (Bullard) Woodward, Edward Jacobs Bullard, Elizabeth (Chadbourne) Smith and Emily Roxana (Chadbourne) Carus. She leaves four daughters: Christina Pizzaro, Sivea née Elizabeth Channing (Cattell) Key and husband Mark Scott Key of Fort Collins, CO., Dr. Gwyn Morwena Cattell of Whiting, VT and Dr. Marguerita Briana Cattell and her husband Dr. Arden Joel Nelson, and one son Roland Henry Baker, III and his wife Lisa Anne Chenvert of Fremont, CA. Aside from her children she is survived by a sister Nancy Pedrick (Chadbourne) Maze and a sister-in-law Mary Louise (McConville) Chadbourne, nephews and nieces, William Bronson Maze, Gregory Chadbourne Maze, Henry Hamilton Maze, Gay Kellogg (Chadbourne) Canepa, Scott Holt Chadbourne, and June Warren Chadbourne, two great aunts, Mary Ann (Bullard) Horning of Hockessin DE., and Sarah Clark (Bullard) Lucey of Santa Barbara, CA. Grandchildren: Cameron Loran Key and wife Cameron Swab of Fort Collins, CO., Melinda Meera Harvey-Salomon and husband Patrick of Ripton, VT, Matthew Isaac Harvey of Jamaica Plain, MA, Joshua Emanuel Harvey of Sunnyvale, CA (and their father, Henry Stimpson Harvey), Fiona Rose Nelson of Fort Collins, CO., and Samuel Campbell Nelson of Laporte, CO. One great granddaughter Hedda Louise Fester-Seeger of Berne, Germany (and her mother Marie-Theres Fester-Seeger) and many cousins. Services will be held via Zoom from the home of Sivea Key at 10AM. Prayers will be offered at the Providence and Boston Vedanta Societies. Burial will be in the Chadbourne family plot at Mount Auburn in Cambridge, MA. Please send donations to: Ramakrishna Vedanta Society, Boston https://vedantasociety.net/contribute Vedanta Society of Providence https://vedantaprov.org/ (scroll down to “Donate via PayPal” button)

The family of Joan Leonard Chadbourne created this Life Tributes page to make it easy to share your memories.

Send flowers to the Chadbourne family.