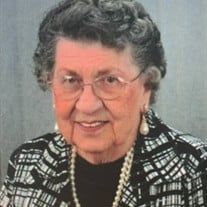 Jo Ann Strader of Windsor, CO, passed away on January 24, 2022 at Good Samaritan Society Water Valley Senior Living Resort in Windsor, CO. Services will be held at 10:30 AM on Friday, January 28, 2022 at Redeemer Lutheran Church in Ft. Collins, CO. Reception following the service; Internment will be at Grandview Cemetery in Ft. Collins, CO. Pastor Tim Runtsch of Redeemer Lutheran will be officiating, with Pastor Janice Mount of Good Samaritan Society offering a remembrance. Jo Ann Strader was born on March 26, 1933 to John Reichenbach and Mabel Alma (Bear) Reichenbach of Gettysburg, South Dakota. She graduated Gettysburg High School and married Charles “Chuck” Edward Strader on October 29, 1951 in Wichita, Kansas. They had two daughters Susan Jo and Vicky Lynn. Jo Ann is survived by her daughter Susan Jo and husband Clair Lee Knapp of Johnstown, CO, and two grandchildren: Kimberly Sue Knapp of Loveland, CO and Ryan Lee Knapp and Wife Michelle Knapp of Riverside, California. Her sister Shirley Jean Nagel and husband Karl Nagel of Shell Knob, Missouri also survive Jo Ann. Jo Ann was preceded in death by her Husband - Charles who passed on April 25, 2012 & Daughter - Vicky who passed on November 29, 1978. Jo Ann is also preceded in death by her Parents, and two Sister’s Dorothy Raasch, and Kathryn Loitwood. It’s difficult to express in a few words what Jo Ann accomplished in her life. She was an amazing woman! She was a devoted wife and mother, not to mention a businesswomen, leader, and co-founder of the Epilepsy Task Force of Ft. Collins, CO. She also enjoyed organizing social events; she became well known where ever she lived. Jo Ann was a compassionate person who was always caring for others. Last but not least she was an awesome cook and hostess and made many great meals. Family and friends especially loved her homemade chicken and noodles , biscuits and gravy. Jo Ann enjoyed her later years living at Good Samaritan Society Senior Living Facility in Windsor, Colorado. She loved the people and felt a great sense of purpose in living there. She was involved in many things, some might say to involved. She didn’t hesitate in voicing her opinion, you might say she had a little sass. Jo Ann joined the Happy Hatters Group at Good Sam’s and loved making knitted hats with her friends for local charities. The group often produced 200 hats or more each year. Jo Ann tried to greet most new residence at Good Sam. She often comforted the new residence by telling them “Your Good Sam Friends areYour New Family.” How true that is…. She has always been a realist and looked at life changes as an adventure. She’s touched so many lives. Jo Ann often said, “I’ve had a great life and I’m ready to go.” “This world no longer needs me plus I got lots of people up there I want to see, when I make it to heaven.” Jo Ann will be remembered by many………….. In lieu of flowers the family requests that memorials be directed to the charity of your choice. Please join the family for lunch to reminisce about this very special lady.

The family of Jo Ann Strader created this Life Tributes page to make it easy to share your memories.

Send flowers to the Strader family.