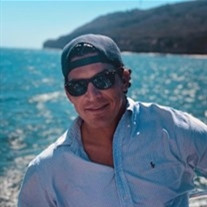 Jeffrey Lewis Sutton was born October 4th, 1983 in Fort Collins, CO, and went home to Jesus September 26, 2020 on Mount Shasta in northern California after a climbing accident. Jeff loved climbing and often spoke of how he felt so close to God when on top of a mountain. His goal was Everest, especially after spending time in Nepal with a church mission group. On his last day, he sent awe inspiring pictures and texts from Mount Shasta indicating that he was happy, full of love for God, and at peace. Jeff’s early years did not provide even a glimpse of the giant of a man he would become. Family walks would be cut short when Jeff would have to be carried home because he complained his legs hurt. On a windy day, he would complain that he could not breath because the wind was ‘blowing tough’ and he would need to nuzzle into a protective chest. As a youth, he played baseball and, in High School, he played Football for Loveland High. While in his youth, even when he did not yet excel, he always put forth an A+ effort. Although he had no promise of a job after receiving his BS Degree in Sports and Exercise Science from the University of Northern Colorado (UNC) in Greeley, Jeff packed up and moved to Jacksonville, Florida. There, he had hopes of landing a job with the Jaguars. They did, indeed, hire him and he spent three years as a Strength and Conditioning Trainer with the NFL team. While in Florida, Jeff met the love of his life, Caroline Petty, and they were married September 2, 2012. Jeff and Caroline opened the Cross Training Company in Jacksonville where they pursued their dream of training and instructing others in health and fitness. Always needing more, Jeff decided he would compete in the Ironman Triathlon in Louisville, Kentucky. Not a strong swimmer, he trained first in swimming pools and then in the ocean to prepare. Jeff completed the Ironman in 14:04:20. Jeff had a strong desire to serve and always needed to push himself to the limit so, in 2014, at the age of 30, Jeff contacted the Navy, as he wanted to become a Navy SEAL. Initially, he was told they did not accept anyone over 28 years of age, but Jeff would not be denied and was eventually accepted into the SEAL program. After completing his basic training in Chicago, Jeff went to Coronado, California, to begin SEAL Training. He completed the Basic Underwater Demolition/SEAL Training although a chronic shoulder injury prevented him from achieving his dream of becoming a Navy SEAL. After spending time in the ACB-1 Medical Unit, he was honorably discharged from the Navy in November 2017. His time in the Navy required extended separation from home and, unfortunately, Jeff’s and Caroline’s marriage did not survive. Jeff loved California where he could surf, snowboard, and climb so he stayed in the San Diego area. There, he worked at Orange Theory Fitness where he quickly became a popular and beloved coach and trainer. Many of his clients spoke of the big man with a soft heart, a passion to help others, and a beaming smile that radiated honesty and trust. A common thread among his clients was “Jeff changed my life for the better.” Jeff planned to return to Colorado and complete his EMT/First Responder training so he could continue to serve his community as a firefighter, police officer, or sheriff, wherever his skills best fit. Jeff was a man of strong Christian faith and he believed that the time of Christ’s return was drawing near. Always a warrior, he was preparing to fight in the battle between good and evil, a battle that fit with the words he lived by: "Fight the good fight. Finish the race. Keep the faith" (2 Timothy 4:7) Jeff is survived by his father Michael Sutton (Tammy); his mother Jan Sutton; brother Eric Sutton (Lauren); sisters Lindsay, and Taylor Sutton; his dear friend and climbing partner Chelsey Klein and numerous aunts, uncles, nephews, nieces, and friends. A Memorial Service will be held at Timberline Church, 2908 S. Timberline Rd. Fort Collins, CO 80524 on Saturday, October 24, 2020 at 10 a.m. Following the service, a Celebration of Jeff’s life will be held for family and friends at the Fort Collins Elks Lodge 1424 E. Mulberry Street, Fort Collins, CO 80524

Jeffrey Lewis Sutton was born October 4th, 1983 in Fort Collins, CO, and went home to Jesus September 26, 2020 on Mount Shasta in northern California after a climbing accident. Jeff loved climbing and often spoke of how he felt so close to... View Obituary & Service Information

The family of Jeffery Lewis Sutton created this Life Tributes page to make it easy to share your memories.

Send flowers to the Sutton family.