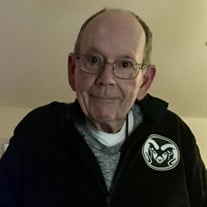 James Wesely Rife, 79, of Fort Collins, CO entered life with Christ on November 14, 2019. He was born on October 27, 1940 in Great Bend, Kansas, the son of Glen and Frances Rife of Larned Kansas. James graduated from Larned Kansas High School and went on to serve 4 years in the United States Air Force as an airplane mechanic. From there he worked a number of different jobs, from working at the Minneapolis post office, Water treatment plant in Lafayette Louisiana, running a cafe in Walden, selling real estate, to laying highways with Sterling company, hauling beer for Coors to California, and back to working at the post office in Fort Collins from where he retired on November 9th 2004. James was a wonderfully patient man who loved the outdoors and was an avid hunter. He really enjoyed the mountains and fishing where he found peace. James was always planning his next trip to Walden. He worked hard and loved his family, and enjoyed practical jokes. He had a gentle way about him but always had a way to make you laugh. He also enjoyed fixing things and working in the garage where you would commonly here some Zydeco music playing on his radio from his days in Louisiana. He enjoyed golfing with his buddies on two of the men's leagues in Fort Collins, and later in retirement he enjoyed RV trips with Susan. He was predeceased by his parents Glen and Frances and survived by Susan Rife whom he was married for 31 years, and had two step children, Tim Nowak and Stacey Nadig and six grandchildren, who loved him very much and will miss him! A memorial service with military honors will be held 10:30 a.m., Thursday, November 21, 2019 at Dayspring Church, 8005 Highland Meadows Parkway, Windsor, CO 80528.

The family of James W. Rife created this Life Tributes page to make it easy to share your memories.

Send flowers to the Rife family.