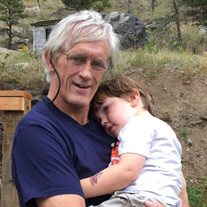 James E. Kramer – A man who moved mountains At peace in the golden glow of Rist Canyon during the fall, sipping hot cocoa, eyes closed, and face turned up to the sky soaking in the warmth of the afternoon sun – “Here I have no worries” Jim Kramer. Jim was a man of few words but many talents. A computer engineer, a map maker, a code writing mathematician. A mountain man who found joy hauling tractors up mountain roads that he helped build. Auction days were his best days-finding pallets of hidden treasures for countless projects and endless ideas. Nothing better than a 17-foot trailer- except an 18-foot trailer. He helped bring Watership Down to our backyard with a special bunny auction find, and nearly lost a thumb building a fence to keep them all on our mountain top. He could eat an apple in 2 big bites and chomped on tomatoes just the same. He had an affinity for animals- from his best dog friend Peterbilt to a feral mama mountain cat - he showed his gentle side when caring for animals. A true connoisseur of movies and music - he was an expert at the buy one get 7 free catalogs. Jeremiah Johnson, The Good The Bad The Ugly, and Arnold afternoons. His last words were quoted from Man With No Name – Clint Eastwood. He always knew where to find a good breakfast burrito with green chili to top it and he could spot the best deal on gas a whole town away. He would sweat while eating eggs and was always sure to take “dad tax” from the best meals when he could. In his later days, he shifted his projects away from building houses and garages to more grandpa level endeavors -Treehouses, sailboat hideaways, campgrounds with benches and basketball courts. He had big plans, so many ideas, and not enough time. He will be missed - our chief old guy COG. James “Jim” Kramer was born on October 3rd, 1952, in Fort Collins CO. to Bill and Martha Kramer. Jim passed away in Fort Collins CO. on February 19th, 2022, at the age of 69. Jim has two brothers, Mike, & Dan, three children, Jon, Thomas, & Kristen, 5 grandchildren, Lucas, Dylan, James, Rose, Loretta, and 2 grand dogs Mannix and Wizard. A celebration of life will be held at future date at one of his mountaintop playgrounds.

James E. Kramer &#8211; A man who moved mountains At peace in the golden glow of Rist Canyon during the fall, sipping hot cocoa, eyes closed, and face turned up to the sky soaking in the warmth of the afternoon sun &#8211; &#8220;Here I have... View Obituary & Service Information

The family of James Edgar Kramer created this Life Tributes page to make it easy to share your memories.

Send flowers to the Kramer family.