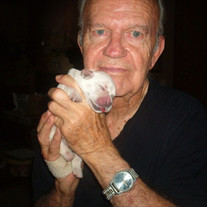 Jack Douglas MacArthur Brooks, February 6, 1942 - February 22, 2020. Retired Colorado educator, raconteur/fiction writer Jack Brooks died unexpectedly at home in the Poudre River Valley near Fort Collins on February 22, 2020. A native of Paducah, Texas, alum of North Texas State University, M.A. in Literature, and twenty-year core faculty of the highly regarded Adult Education program of the St. Vrain Public Schools, Longmont, Colorado, he is survived by his wife, retired professor of English and Creative Writing and acclaimed American poet Jenne’ R. Andrews-Brooks. He also leaves a daughter Kelley J. Brooks, daughter of Becky Brooks, both of Denver, nephew Ricky Brooks of Colorado Springs and multiple great-nieces and nephews. He was preceded in death by his parents, brother Marvin H. Brooks Jr. and his sister, Mary. Jack was a Lieutenant JG in the U.S. Navy, serving aboard the USS LaSalle, a ship commissioned as a troop transport during the Vietnam War. He has written of his many ports of call and adventures “aboard ship” and elsewhere, as well of his adoration of his family and vacations to Colorado—“He would never forget the day they stopped on Independence Pass and ate cherries…” one short story enticingly begins, recounting a high country adventure on one of many trips West. He in fact loved all things Western, moving to Colorado in the 80’s and buying property in the Poudre River Valley in Larimer County. On a beautiful June day in 1990, he met Andrews-Brooks at a stable where they each kept their horses. On their property with its natural creek and towering cottonwoods, he and his wife combined a writing life with raising Golden Retrievers and enjoying their American Quarter Horse and Arabian mares. In recent years the couple founded Ardorgold English Golden Retrievers, importing several stunning dogs from abroad. He was a meticulous craftsman, proud of putting in all utilities on the couple’s property, building two sheds, beautiful decks and post and rail corrals. Jack was also a licensed pilot, worked as a paramedic and in Child Welfare before settling into teaching in the Texas Public Schools. In addition to a rigorous outdoor life, he and Andrews-Brooks enjoyed reading their creative work to each other, quiet gourmet dinners to a backdrop of classical music including opera, and playing with their rambunctious canine family. He completed an oeuvre of fiction in recent years: some two hundred short stories with a variety of themes. He was an informal, ground-breaking scholar of the work of Ernest Hemingway. He and his wife loved classic film together including Roman Holiday with Gregory Peck and Audrey Hepburn, and Bringing Up Baby, Katherine Hepburn and Cary Grant, delighting in Hollywood’s Golden Age. He was a huge fan of Love Actually, Notting Hill, and the “Alien” series. One of his favorite adventures occurred between 1990 and 1991 when he and Andrews-Brooks were caretakers of the renowned Joder Arabian Ranch outside Boulder; he once cut the head off a diamond-back with a shovel when, shaving and semi-attired, he noticed the critter menace his dogs from the window. He especially enjoyed the birth of the couple’s Arabian foal “D.K.”—Dusty Kiss, whose name was his coinage. At the arrival of the first foal on the ranch in years, the entire herd was jubilant and excited, calling to and straining at the fences to meet the little colt. Another favorite adventure and effectively the couple’s honeymoon: a trip to Lost Trail Ranch high in the Colorado San Juan’s in 1990 and riding up into the timber in a finely misting rain to the headwaters of the Rio Grande, staying in a century-old cabin preserved on that ranch to this day. As is the case with all whom we love, his death has darkened the very sky and speaking of him at all in the past tense is acutely painful. For Jack was a tall classic blue-eyed, soft-spoken Texan and a man without enemies, generous, deeply kind, and selfless in his willingness to help and nurture those he cared for. He adored his daughter and over the years had the great fortune to be loved by not one but two dynamic women he was infinitely proud of. In recent years as his wife became disabled, he was her devoted caregiver. His passing is deeply devastating to those who loved and continue to love him; he is irreplaceable, and surely if there is a heaven, was welcomed with open arms by the angels and his God. His wife shares the following poem in tribute: The Waltz In Memoriam for my husband Jack I remember The deep blue chocolate box Reading Baci—kisses—from Perugia I brought home From Italy Where a couple waltzed Dancing in shimmering symmetry On a crepuscular eternity, Moving in ballroom elegance To Verdi, In unending alliance, Like Lancaster’s Sicilian Prince With the stunning Cardinale In Visconti’s film Il Gattopardo, The night long and without a care. Such a heaven, Where they, so abundantly joined in mortal life, May glide and whirl together In perpetuity; I would take a taste of paradise now, To hasten our reunion— The rich midnight chocolate In its gilded foil To keep in my camisole With a ticket to the train leaving For the stars. How remarkable that you kept my dance card So full my love, Ushering me out onto the parquet In my teal gown In our mortal pas de deux And look how victorious Beyond the profane scrim of death The couple behind the sky, whirling in their finery Through immortality’s midnight Framed in starfire, Those whose lovers have yet To rejoin them Waiting in tuxedos And frothing ball gowns In the shadows-- Waiting as I am To dance with you Again. Especial thanks to Elizabeth Elliott, founder, Opera Fort Collins, for her loving and gracious assistance. Contributions in lieu of flowers may be made to the Bohlender Funeral Home in Fort Collins.

The family of Jack Douglas MacArthur Brooks created this Life Tributes page to make it easy to share your memories.

Send flowers to the Brooks family.