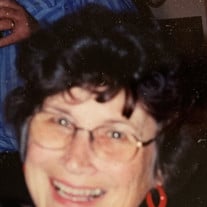 Beloved mother and grandmother, Irene Lenora King (Norton), born on September 3, 1931, in Winfield, Kansas, passed away on August 16, 2020, in Fort Collins, CO, at 88. The oldest of four, born in the middle of the dust bowl in Kansas, Irene showed that she was resilient from day one. From winning a beauty pageant as Miss ShoeMart in Winfield to her job as a soda jerk, inspiring her lifelong love of Coca-Cola, she added glamour and her sweet presence to everything she undertook. She graduated from Winfield High School in 1949. She married Dan E. King on October 8, 1950. After the birth of their first son, Tris King, in Kansas, the family moved out to Greeley, Colorado, where Andrea Leigh King, Denise Lynn Moore (King), and Joel Edmund King were born. In the early 1960s, the King family moved to Fort Collins, where Irene stayed for the remainder of her life. Irene loved Scotland, genealogy, Wheaton terriers, bowling, Neil Diamond, shoes, perfume samples, listening to bagpipes, and waving to babies. She was well-loved while working at the Denver Dry Good Company and the Poudre Valley Hospital until her retirement in 1995. She was on many local bowling leagues throughout her bowling career. She could always be counted on for a trip to the Highland Scottish Festival or an in-depth discussion about the genealogy she had found for her family. Irene is preceded in death by her parents, Vincent and Beryl Norton, sibling Melvin (Carol) Norton. Her siblings survive her, Melvin (Carol) Norton and Dolores (Terry) Taton, Allen (Susan) Norton, children Tris King, Andrea King (Dale McWilliams), Denise (Richard) Moore, Joel King, grandson, H. Adam Meyer, granddaughter Jessica Vyvial-Larson, and great-granddaughters, Haley Ann Meyer, Emma, and Sophia Larson. A virtual memorial will be conducted, and cremation has occurred. Donations in lieu of flowers can be made in honor of Irene King at the Alzheimer’s Association (https://act.alz.org/site/Donation2df_id=32112&32112.donation=form1&utm_source=google&utm_medium=paidsearch&utm_campaign=google_giving&set.custom.wt=giving&gclid=EAIaIQobChMIseHbn5mr6wIVnD6tBh1_ZwFSEAAYASABEgIMPPD_BwE)

Beloved mother and grandmother, Irene Lenora King (Norton), born on September 3, 1931, in Winfield, Kansas, passed away on August 16, 2020, in Fort Collins, CO, at 88. The oldest of four, born in the middle of the dust bowl in Kansas, Irene... View Obituary & Service Information

The family of Irene Lenora King created this Life Tributes page to make it easy to share your memories.

Send flowers to the King family.