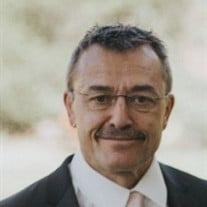 Gary Ralph Zimmerman, born January 27th, 1958, passed away peacefully on May 6th, 2022 in Memphis, TN. Viewing will be held at Bohlender Funeral Chapel in Fort Collins on Monday, May 16th from 9:00am to 4:00pm. A Rosary will be held later that day at Bohlender’s at 6:00 pm. A Funeral Mass will be held at St. Joseph’s Catholic Church Tuesday, May 17th at 9:30 am. Gary was born in Rochester, New York to Arthur and Catherine Zimmerman; he was the 5th child of 9 children. When Gary was 13, his parents moved to Colorado with the children in tow. Once settled, he would attend Cache La Poudre middle school and Poudre High School. After graduating PHS in 1976, he was employed with the Eastman Kodak Company, retiring after a 38-year career. In 2015, Gary briefly returned to work with Jorgensen Laboratories. In 2016, Gary was diagnosed with laryngeal cancer. After seeking treatments in Colorado, he fully retired from Jorgensen’s in 2020, and relocated to Memphis, TN where he could continue treatments and spend time with his son, daughter-in-law, and grandchildren. During Gary’s youth in Rochester, you could find him out with his brothers and friends. In the winter, the frequent favorite of his was sledding at the town park and ice-skating and playing hockey on a local pond. During the other parts of the year, it was walking the train tracks, roller skating, and playing Pop Warner football (for the East Rochester Bombers) that did the trick. His love of playing sports with his friends and brothers traveled with him to Colorado, where he played varsity baseball, and coached Little League. He would eventually join a work-place basketball team within Kodak and then later play with a fast-pitch softball team for Sipes Concrete Construction. During his time in Colorado, he frequented many sporting events like Colorado Rockies NHL games, Colorado State football and basketball games, as well as some trips to Colorado National Speedway. As Gary grew older, he continued with his athleticism through ice skating and long-distance bicycle riding. A couple of his favorite riding spots included Horsetooth Reservoir and Bingham Hill. Gary was preceded in death by his parents Arthur and Catherine, nephew James, and sister-in-law, Caterina. He is survived by his children Hannah and Keon (Brenna), his grandchildren Lena, Jeremy, and Luke, and his siblings Eric, Mark, Mary Lou (Borden) Mills, Craig (Carma), Denise (Pamela), Jon, Jeffrey (Jackie), and Lance (Trisha). Gary had 31 nieces and nephews. Contributions may be made to St. Jud'es Children's Hospital by going to https://fundraising.stjude.org/site/TR/GiftFunds/GiftFunds?px=6240099&pg=personal&fr_id=39300.

Gary Ralph Zimmerman, born January 27th, 1958, passed away peacefully on May 6th, 2022 in Memphis, TN. Viewing will be held at Bohlender Funeral Chapel in Fort Collins on Monday, May 16th from 9:00am to 4:00pm. A Rosary will be held later... View Obituary & Service Information

The family of Gary Ralph Zimmerman created this Life Tributes page to make it easy to share your memories.

Send flowers to the Zimmerman family.