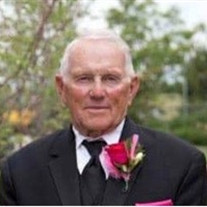 Longtime Fort Collins/Wellington resident, Gary Wiles Whitehead, passed away on July 25, 2020 surrounded by his immediate family at Poudre Valley Hospital. Gary was born March 23, 1939 in Durango, Colorado to Harvey W. & F. Carol Whitehead. He was the eldest of four children. He met the love of his life, Marian Fellhauer of Fowler, Colorado. The couple met in November 1959, began dating the January of 1960 and wed in June of 1960. They welcomed their first child, Douglas Whitehead in February of 1961, their second child, Greg Whitehead in May of 1963, and their third child, Todd in February of 1967. Gary prided himself on hard work and provided for his family working as an electrician before he founded Fort Collins Electric in 1984. Gary held himself to a high standard and set a strong example for his family and those around him. Gary was also a man who treasured life, as he was an avid hunter and fisherman, who also loved to golf with family and friends. He enjoyed traveling and always looked forward to family gatherings. Gary was a man of honor and strong faith, who was a longtime member of Faith Church. Gary will be deeply missed by his family and friends. He is survived by his wife, Marian Whitehead. His son Doug and daughter-in-law Debbie, and their children Justin, Cody, and Heather. His son, Greg and daughter-in-law Cindy, and their children Ethan, Jenice, and Caleb. He was a Great-Grandfather to seven, Cooper, Liv, Quinn, Heaven, Riley, Walker and Paige. His Sister Cheryl and brother-in-law Jim Knox, sister, Carolyn and brother-in-law John Baudendistel, nephew Craig Knox, nieces Cleigh Sandon, Jennifer Mayfield, Rachael Vrtatko, Laurie Yoder. He is proceeded in death by his parents, Harvey & Carol, his brother Kenneth and his son Todd. In lieu of flowers, please send donations to MD Anderson Cancer Center in Houston, TX. Click link shown, www.mdanderson.org.

The family of Gary W. Whitehead created this Life Tributes page to make it easy to share your memories.

Send flowers to the Whitehead family.