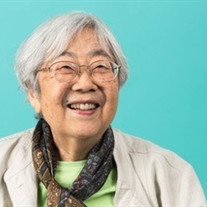 Florence Numajiri Field passed away peacefully on July 2, 2021, just one month shy of her 97th birthday. Florence was an accomplished artist, a brilliant writer and organizer, a joy-filled friend, and a loving mother and grandmother. Though small in stature, Florence was a mighty, yet humble, bundle of passion and righteous action on behalf of those in her community. She deeply inspired anyone who had the good fortune to know her. With her passing, our community has lost a drum major for justice and peace. Florence Sachi Numajiri was born on August 6, 1924 in San Francisco to Chojiro Numajiri and Sai Shibata. In April 1942, the Numajiri Family was removed from San Francisco and interned at the Topaz Internment Camp in Utah, in a civil rights outrage that fueled Florence’s passion for justice. After some six months in camp, she was allowed by the U.S. Army to attend Heidelberg College in Tiffin, Ohio, where she majored in biology. Notably, she was a champion at badminton and was crowned Heidelberg College’s “Birdie Queen” during her time there. She graduated and moved to Chicago with her parents upon their release after the war. She enrolled in the graduate political science program at the University of Chicago, where she met her future husband, John Field, who was a graduate student in sociology. They were married in 1950. Interestingly, because Florence is Japanese American, and John was Caucasian (in fact, descended from some of the original English settlers in America), they were effective fair housing testers in Chicago during the 1950’s and ’60’s. She was never afraid to take a stand for a just cause, even if that meant she would be arrested. She protested the failure of the Chicago schools to integrate. She marched the streets of Chicago at that volatile time, passionately working towards equality. In 1966, she received her MA in the Social Service Administration (SSA) school at the University of Chicago. In 1968, she was an innovative leader who created programs in inner-city Chicago libraries that served the entire community. Her favorite job was as an adjunct professor at the SSA where she taught a multi-disciplinary course in social policy and planning until the end of the 1970’s. She and John retired in 1984 and moved to Damariscotta, Maine. But her retirement was hardly restful. She and John helped found the Roundtop Center for the Arts, the Community Housing Improvement Project, and the MidCoast Transportation Center which provided transportation to the elderly in rural Maine. In 2001, Florence and John moved to Fort Collins. Sadly, John passed away in December 2001, ending what had been an on-going, lively, intellectual and loving conversation for more than five decades on how to live life and improve the quality of life for others. Florence continued her passionate work for peace and justice here in Larimer County. She joined the League of Women Voters, where she was a leader and an abiding presence and inspiration to other members. She helped found an ACLU chapter in Northern Colorado and was a volunteer for Colorado Legal Services when she was in her eighties. In 2014, Florence was named a Super Woman by the Fort Collins Coloradoan. (https://www.coloradoan.com/story/mind-body/meet/2014/07/14/super-woman-profile-florence-field/12641761/) and was awarded the City of Fort Collins Human Relations Award. A determined fighter for justice, Florence was always joyful and reveled in life. She loved spending time with her sons and grandchildren and discussing politics and the events of the day. Her favorite phrase sums up her view of life: “Oh, goody!” Florence’s dedication to equality, justice, and peace has changed our community for the better. She will be deeply missed. She is survived by her sons Andrew and Stuart, daughter-in-law Julie, and grandchildren Samuel and Ellen. She was preceded in death by her husband John. A Celebration of Florence’s Life will be held on Saturday, August 7, 2021, from 5:30 to 8:00 p.m. at the Children’s Garden at the Gardens on Spring Creek in Fort Collins. In lieu of flowers, Florence requested that memorial donations be made to the ACLU or the League of Women Voters of Larimer County. https://www.lwv-larimercounty.org/content.aspx?sl=1003246284

Florence Numajiri Field passed away peacefully on July 2, 2021, just one month shy of her 97th birthday. Florence was an accomplished artist, a brilliant writer and organizer, a joy-filled friend, and a loving mother and grandmother. Though... View Obituary & Service Information

The family of Florence N. Field created this Life Tributes page to make it easy to share your memories.

Send flowers to the Field family.